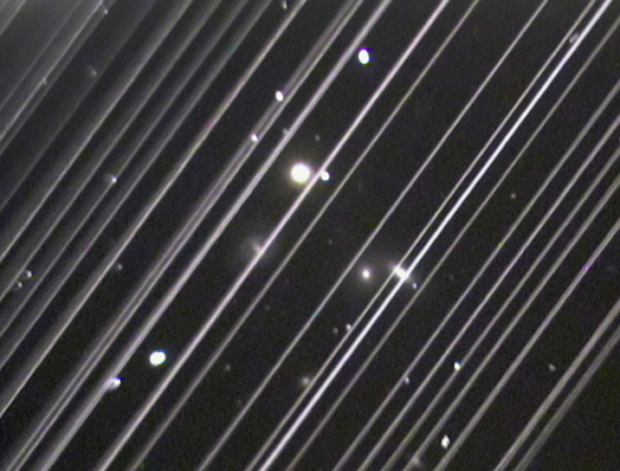 An image of a distant galaxy group, photographed by a U.S. observatory in May, includes streaks of light reflected by satellites launched by SpaceX. Courtesy of Victoria Girgis/Lowell Observatory via The Japan News/Asia News Network

TOKYO — The National Astronomical Observatory of Japan has expressed concern that satellites orbiting the Earth are having a negative impact on astronomical observations.

In a statement released last Tuesday, the observatory called on satellite-related businesses to consider the impact of their actions and to take appropriate countermeasures.

The NAOJ said the hundreds of satellites currently in operation are starting to hinder astronomical observations, such as by reflecting the rays of the sun and when the radio waves.

they emit get mixed up with those from heavenly bodies.

The issue gained prominence when a U.S. observatory photographed numerous light rays from 60 communications satellites launched in May by Space Exploration Technologies Corp. of the United States.

The company, commonly known as SpaceX, aims to launch 12,000 communications satellites, while other private companies are also planning to send large numbers of satellites into orbit.

The NAOJ and other astronomical organizations called on companies to use materials that do not reflect as much sunlight and to adjust the types of radio waves they use, among other actions.