Wellington, New Zealand — The Pacific’s low-lying reef islands are likely to change shape in response to climate change, rather than simply sinking beneath rising seas and becoming uninhabitable as previously assumed, new research has found.

Atoll nations such as Tuvalu, Tokelau, and Kiribati lie only a few meters above sea level and are considered the world’s most vulnerable to global warming, with fears their populations will become climate refugees as waters rise.

But a study published this week found that such islands “morphodynamically respond” to the environment because they are composed of the skeletal remains of tiny reef-dwelling organisms, rather than solid rock.

The researchers said evidence that such islands slowly change like shifting sands had profound implications for climate change planning in affected nations.

“The effects on individual islands will vary so that while some areas may become uninhabitable, (other) areas will keep pace with rising seas,” he said.

“It will be up to governments and communities to decide how to respond over time, but we think this study highlights the fact that nature provides a template for adaptation and island communities may need to adapt too,” he added.

The study, conducted by researchers from New Zealand, Britain, and Canada, was published by the Geological Society of America this week. 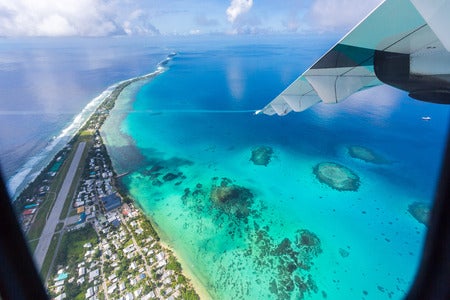 The researchers created a 1:50 scale model of Tuvalu’s Fatato Island in a 20-meter (66 foot) flume tank to test the impact of rising seas and increasing storm surges caused by climate change.

They found the crest of the island became higher and the entire landmass shifted across the underlying reef.

The same team last year used historical aerial photographs to show that the land area of Tuvalu’s nine atolls and 101 reef islands has increased by 2.9 percent between 1971 and 2014.

The concept of climate change forcing Pacific islanders from their homes is a sensitive issue in atoll nations.

But it quietly shelved the idea last year after receiving feedback from islanders, who wanted relief efforts to concentrate on saving their homes rather than easing access to new ones elsewhere.

The 18-member Pacific Islands Forum will hold its annual summit in Tuvalu next month, with climate change expected to again top the agenda. /kga