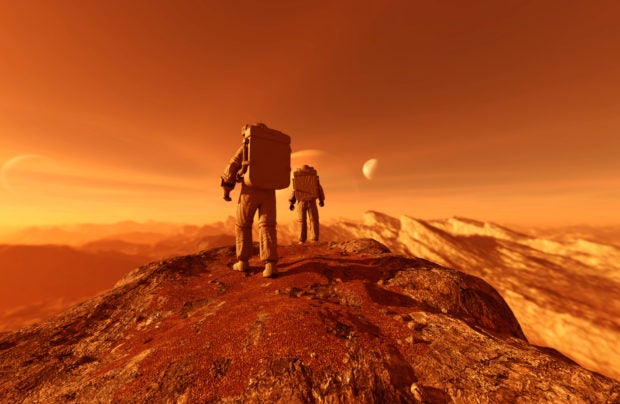 Resveratrol could preserve the muscle mass of astronauts about to embark on a long journey through space, to reach Mars, for instance. Image: iStock/chainatp via AFP Relaxnews

Harvard researchers have conducted experiments during which they administered daily doses of resveratrol to rats. This compound, found in red wine and dark chocolate, could help maintain muscle mass of astronauts about to embark on a long journey through space, to reach Mars, for instance.

In April, the National Aeronautics and Space Administration pledged to bring astronauts to Mars by 2033, a one-way trip that could take, in the best-case scenario, between seven and nine months. But a host of problems remain to be solved before humans can safely explore the Red Planet, starting with the potentially heavy consequences on the astronauts’ health.

A NASA-funded 2018 study conducted on mice and published in 2018 in Proceedings of the National Academy of Sciences hinted at the serious damages that the radiation found on Mars could wreak on the human body, such as the destruction of gastrointestinal tissue and colon cancer.

In this latest study, once again sponsored by NASA and published in Frontiers in Physiology, Harvard scientists analyzed the thorny matter of muscle deconditioning.

“After just 3 weeks in space, the human soleus muscle shrinks by a third. This is accompanied by a loss of slow-twitch muscle fibers, which are needed for endurance,” explained study director Dr. Marie Mortreux.

Starting from data from a previous study during which researcher Mary Bouxsein experimented on rats, the scientists simulated the gravity levels of Mars on rats and tested different foods, such as prunes, that could preserve the muscles and bones of astronauts that could one day be headed for Mars. Among the top nutrients was an antioxidant and anti-inflammatory compound found in red wine, chocolate and blueberries.

The experiment demonstrated that a moderate daily dose of resveratrol helped preserve the rodents’ front and rear paw grip force.

“Resveratrol treatment promotes muscle growth in diabetic or unloaded animals, by increasing insulin sensitivity and glucose uptake in the muscle fibers,” Mortreux explained. “This is relevant for astronauts, who are known to develop reduced insulin sensitivity during spaceflight.”

The researchers have stressed the necessity of conducting further studies to better understand the mechanisms at play, and to determine the best dosages (up to 700 milligrams per kilogram daily) for male and female astronauts, as it will also be critical to ensure there are no “potentially harmful interactions of resveratrol with other drugs administered to astronauts during space missions.” HM/JB

For the first time, AI solves Rubik’s Cube with no human help