NEW YORK — Some of the day’s most pointed media criticism lets its subjects do the talking.

The news outlet NowThis has attracted attention with videos that illustrate inconsistencies by Fox News personalities, like one posted Tuesday that contrasts the news network’s treatment of Michelle Obama with her successor as first lady, Melania Trump.

Clips show Fox commentators criticizing Michelle Obama’s wardrobe, saying she needed to drop a few pounds and calling her the “merchant of death.” Meanwhile, Melania Trump is called stunning, spectacular and “a woman of strength who should be revered.”

Back-to-back clips show Fox’s Dana Perino suggesting that Michelle Obama gets a pass from criticism and, at another point, saying “she’s carrying a bag that costs $1,200 and nobody said a thing.”

Fox, for its part, pointed out that NowThis was founded by two men who worked on the Huffington Post, which the network regards as a liberal publication that opposes it. The network also questioned the fairness of some videos because they featured people who no longer work at Fox.

NowThis started in 2013 and is aimed at an under-30 audience, distributing videos that are most often viewed on social media. Since the dawn of the Trump administration, NowThis has increased its focus on the media.

In recent weeks, NowThis has distributed videos that criticized NBC News for not including more questions on climate change in the first Democratic presidential debate, and for the propensity of many news outlets to soften coverage of sex offender Jeffrey Epstein through use of the term “underage women.” One memorably creative piece took clips from Sinclair Broadcasting affiliates that showed newscasters across the country reading from the same script.

The Fox videos, more than a dozen of them, have made the biggest splash.

One that has gotten the most views, some 40 million, compares how Fox has covered President Donald Trump’s meetings with North Korean leader Kim Jong Un with the mere suggestion that his predecessor Barack Obama would. It includes Trump’s national security adviser, John Bolton, saying it would be a bad idea for Obama to meet with Kim.

“Obama would personally negotiate with the leaders of terrorist nations like Iran and North Korea without preconditions. Wow,” Hannity said when Obama was president.

After Trump met with Kim, the video shows Hannity saying “the world will probably be a little bit safer. The world should be giving President Trump credit for that.”

A Fox spokeswoman noted that nearly half of the people in the North Korea and first lady videos no longer work at Fox or were guests and not employees.

“These videos are entirely cherry-picked and designed to fit their narrative,” said Fox’s Carly Shanahan.

In one sense, the Fox videos are a compliment, recognizing the network’s influence with the public and the administration, NowThis said.

“You just can’t disconnect today the relationship between Fox News and the current administration,” Stephanopoulos said. “Then you add in the fact that Fox News birthed itself under the moniker of fair and balanced, and yet you’re able to present very clearly that this is anything but fair and balanced, it inherently resonates with our audience.”

Seeing the contrasting clips, “it’s almost as if you’re looking at two different universes,” he said.

Other Fox-related videos compare how the network reacted to both presidents’ use of executive orders, and pointed out incidences where Obama was criticized for things that would later come up with Trump — like the frequency of golf outings.

Former “Daily Show” host Jon Stewart is one inspiration for the work, which combines accountability journalism with comedy. Much of the NowThis audience has come of age politically in the “fake news” era and is very interested in media coverage, said Nico Pitney, the company’s political director. (Pitney once worked at the Huffington Post.)

The packages have no narrator. “Showing and telling is generally our aim,” Pitney said.

The editorial hand is evident in how the clips are juxtaposed and in the mixture of music both patriotic and ominous — and in the Hannity clip chosen to wrap up the first lady package.

“There’s a double standard,” Fox’s most popular personality says. “We all know that. It’s transparent.” 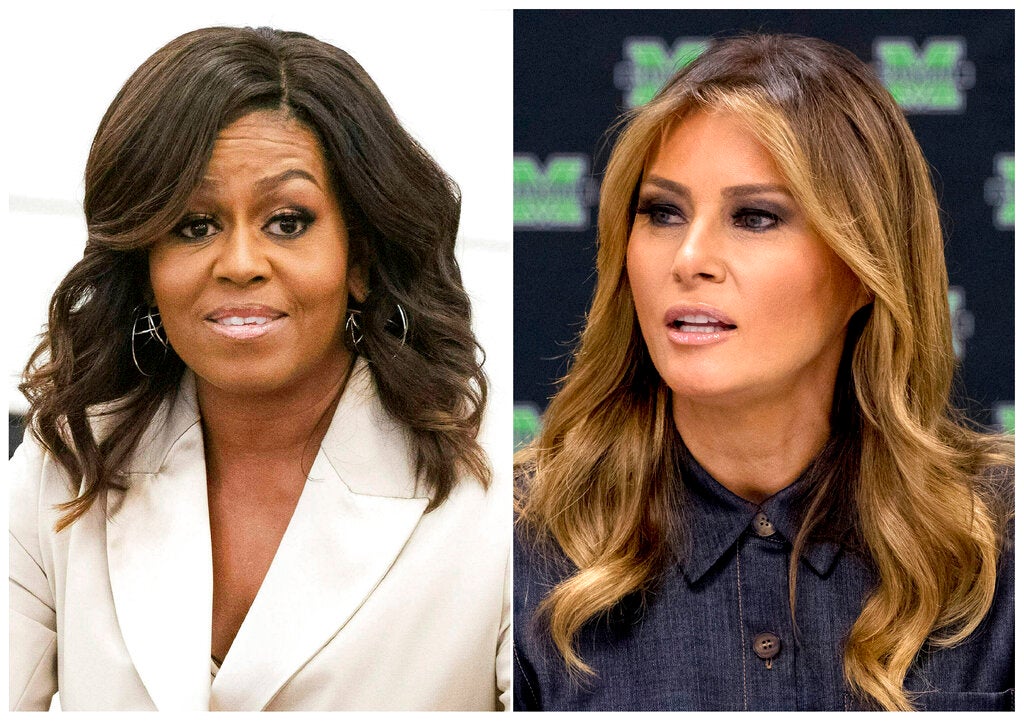