Lebanese kick up stink over smell fix for garbage woes 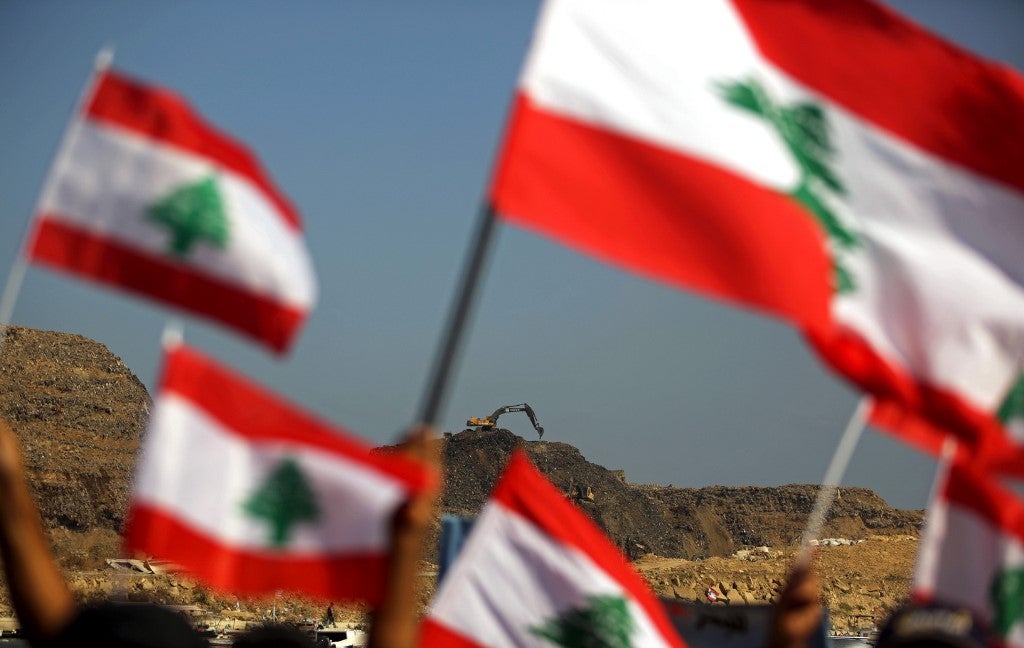 In this file photo taken on August 16, 2017, family members of Lebanese fishermen wave their national flag during a protest at a fishing port north of Beirut against the Bourj Hammoud landfill dump (background). – Four years after a trash crisis sparked political protests in Lebanon, the garbage stench is back and government efforts to address it have sparked demands for better waste management. In the Beirut suburb of Bourj Hammoud, a seaside landfill that reopened to solve the 2015 crisis will be full by the end of the summer. AFP

Beirut, Lebanon — Sitting at a plastic table outside her flatbread sandwich shop in the Lebanese capital, Nadime Yazbeck said she wishes the government would deal with the stench from the local trash dump.

“They really need to find a solution to these smells,” said the 66-year-old Beirut resident, in a spotless white t-shirt and hair net.

Four years after a garbage crisis sparked political protests in Lebanon, the stench of trash is back and government plans to quell the smell have only triggered demands for better waste management.

In Yazbeck’s neighborhood of Bourj Hammoud, a seaside landfill that reopened to solve the 2015 crisis will be full by the end of the summer.

Near the airport, another overwhelmed landfill is to start refusing waste from neighboring areas in protest.

On and off for more than a year, the acrid smell of decomposing refuse has wafted into homes and businesses in the capital.

Even kilometers away from landfills, residents have raced to close windows to keep out the stink.

Visitors to the tiny Mediterranean nation have been welcomed off flights by unpleasant odors drifting over the airport.

In June, Lebanon’s environment ministry said it had asked an expert to look into the matter and help neutralize the smells.

Lebanese-French agronomy engineer Aime Menassa determined the causes of the stench to include household waste, “badly stabilized compost,” and sewage.

His report unleashed a wave of sarcasm online over a perceived outsider stating the obvious.

“Isn’t there a Lebanese who can smell it?” one person asked on Twitter.

Beyond being unpleasant, the smells also present potential health hazards.

This winter, researchers at the American University of Beirut (AUB) measured the rate of hydrogen sulfide, a smelly gas produced by landfills, in the air in Bourj Hammoud.

Michele Citton, a waste and water expert at AUB, said the levels of the gas – which has been correlated with possible negative health effects – were higher than expected.

A 2018 study in northern China found children living near a landfill were more likely to have deficient immunity and impaired lung function, the latter strongly related to hydrogen sulfide.

But odor suppression is not a sustainable solution, Citton said.

“What these smells are saying to the world and to the community in Beirut is basically that there is a deep need to find alternative methods to solid waste management in Lebanon,” Citton pointed out.

Multi-confessional Lebanon has been rocked by political crises in recent years, especially since the 2011 outbreak of war in neighboring Syria.

In 2015, a landfill closure caused trash to pile up in the streets, sparking protests against political leaders, including under the cry “You Stink.”

The demonstrations have since died down, but mistrust in the ruling class – that includes former warlords during the 1975-1990 civil conflict – still runs high.

Menassa insisted his offer to treat the smell is only meant to be a temporary solution.

Under his plan, a “biodegradable” solution would be sprayed onto the surface or spread through mist into the air at three sites across the capital, he said.

Transforming smelly gas into minerals, the solution would clean garbage trucks traveling in and out of two sorting stations, and lessen the stench from the composting site near Bourj Hammoud.

But “the idea is not to mist forever”, he said, of the odor-tackling practice that needs to be maintained 24/7 to be effective.

“The solution is selective rubbish collection… to avoid having to have to bury these huge volumes in the final landfill,” he noted.

Experts said half of Lebanon’s waste is organic and could be better composted if separated out from recyclables at the household level.

Environment Minister Fady Jreissati, who came into office in January, said only eight percent of Lebanon’s rubbish is recycled.

His plan for the next two years includes trying to encourage better rubbish sorting, and building a new composting plant near the airport by next spring, he told July’s edition of economic magazine Le Commerce du Levant.

He also said a “credible option” would be to widen the Bourj Hammoud landfill – but that would mean destroying an adjacent fishing port.

Activists, meanwhile, have protested plans to open incinerators in Beirut, which they fear will be badly managed and may further pollute the atmosphere.

And as grey smog clings to the skyline, others have questioned the ministry halting air quality monitors due to budget cuts.

Claude Jabre, a You Stink activist who lives in Bourj Hammoud, denounced what he saw as vested business interests and a lack of political will to find alternative solutions.

“We have the energy and the expertise to create what’s called a circular economy” aimed at minimizing waste, he said. “Why can’t we make profit in a way that doesn’t damage the environment?” /kga