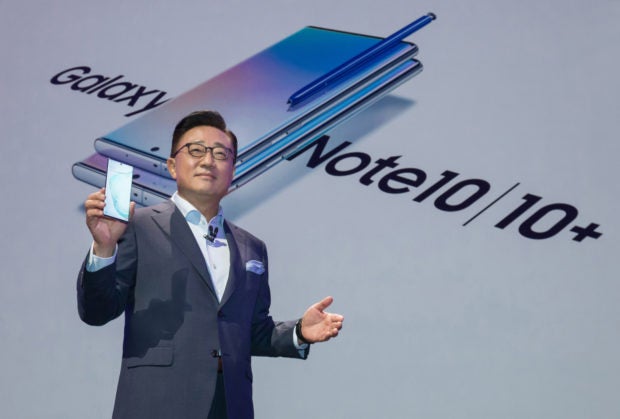 Along with the enhanced S Pen with remote control technology, the South Korean tech giant for the first time, offered two size choices for the smartphone model during its Unpacked event at Barclays Center in New York, the US, which was attended by around 4,000 media and industry officials.

A smaller 6.3-inch Note 10 model — the most compact Note yet — highlights the functions of S Pen and improved efficiency and productivity of using the device for creative work, the firm explained.

Dubbed as “Air Actions,” the S Pen can control the Note 10 device remotely with some gestures in the users’ hands as it is supported by the Bluetooth Low Energy technology.

The low-power wireless technology enables the main device to recognize the pen’s movements.

In addition to the Bluetooth-based Note 9 S Pen that enabled shooting photos and videos with a single click of the pen, the Note 10 S Pen allows users to change the lens direction, shooting mode, zoom-in and zoom-out by personally adding customized gestures for particular actions.

One of the highly touted functions of the S Pen is converting handwritten notes into digital text and exporting them to different formats like Microsoft Word.

With the Samsung DeX platform and Link to Windows function, multimedia content created on the Note 10 and new text messages or call notices can automatically and directly be displayed on a PC running on Windows 10 without additional manual operations, according to Samsung.

Copying and pasting certain parts of a video clip and inserting captions are also now possible.

Along with an Ultra Wide camera, it opens up an entirely new medium for creators. With AR Doodle, use the S Pen to personalize photos with dynamic drawings, effects, and animations that track to the image.

And with 3D Scanner, also the first-ever for the Note, the Galaxy Note10+’s DepthVision camera can take a scan of an object, and instantly turn it into a movable 3D rendering.

Both Note 10 and Note10+ phones are nearly bezel-less, having a small hole for the front-facing camera at the very center of the top part of the display.

The new features also include 30 minutes of charging for use that lasts for almost one day.