NEW YORK –  Samsung executives have long poked fun at rivals for ditching the headphone jack in smartphones. With the new Galaxy Note 10, the company will now be doing exactly the same thing. 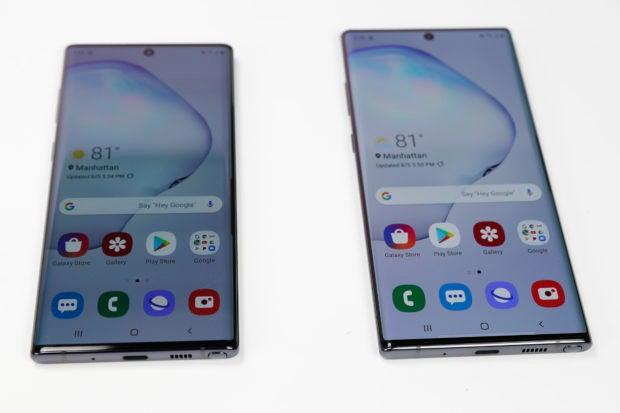 In this Monday, Aug. 5, 2019, photo the Samsung Galaxy Note 10, left, and the Galaxy Note 10 Plus, right, is shown in New York. Samsung’s newest smartphone won’t have a headphone jack. The Galaxy Note 10 loses that, even though Samsung executives have long poked fun at rivals for ditching it. (AP Photo/Frank Franklin II)

The Note 10, announced Wednesday, squeezes in more battery power and other goodies, but at the cost of the familiar old jack.

So now the company is doing an about-face and declaring that many people use wireless headphones anyway.

Samsung, which for years has pushed bigger and bigger displays, is also introducing a smaller version of the Note for those who think phones have just gotten too big.

The new Note models will come out Aug. 23. The main model is being called the Note 10 Plus and will have a display measuring 6.8 inches diagonally.

Though the display is bigger, the overall size is about the same as last year’s 6.4-inch Note 9. To accomplish that, Samsung shrank down even more of the bezel surrounding the display.

The smaller, 6.3-inch version will be called the Note 10 and will sell for almost $950, or $150 less than the Plus. It’s designed for those who want the Note’s signature stylus without its once-signature size.

“You hit a certain point where you can’t get much bigger without being physically too large to hold,” Technalysis Research analyst Bob O’Donnell said. “That’s the challenge they are running into.”

Hardware innovation in mobile devices has been slowing for years. Samsung is addressing that with a foldable model, with twice the display when unfolded. The Samsung Fold is coming in September after Samsung made a few design changes to address problems with reviewers’ phones breaking.

Apple is expected to release new iPhones next month. A version that works with next-generation 5G cellular networks isn’t expected. Samsung will have a 5G version of the Note 10 Plus starting at almost $1300.

The Note 10 Plus will have a 7.5% boost in battery capacity over the Note 9, though Samsung’s high-end phones have already been promising all-day battery life. Samsung made no references to the headphone jack during its 70-minute announcement event in New York. 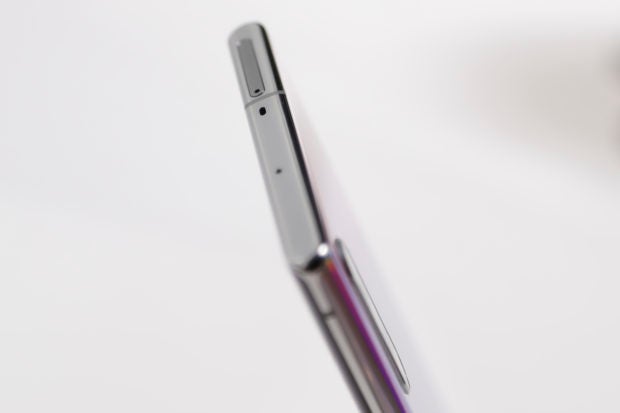 In this Monday, Aug. 5, 2019, photo the top of the Samsung Galaxy Note 10 Plus is shown in New York. The new Note models will come out Aug. 23. The main model is being called the Note 10 Plus and will have a display measuring 6.8 inches diagonally. (AP Photo/Frank Franklin II)

Samsung is including wired headphones that plug into the phone’s USB-C data and charging port. An adapter for other wired headphones is sold separately for $10. Apple and Google also have ditched the standard headphone jack.

But O’Donnell noted the irony: “If you guys gave everybody else grief for doing it, why are you doing it?”

Beyond that, the Note 10 phones introduce new stylus features, including the ability to flip through music and photo libraries by gesturing with the stylus in the air. The phones bring a wider-angle lens already found in the S10 and use software to make audio appear louder — and thus closer — in video recordings when zooming in.

And by connecting a Note 10 to a Windows or Mac computer with a USB cable, users can interact with phone apps there and drag and drop files between devices.

Microsoft CEO Satya Nadella appeared briefly to expand on a partnership with Samsung. The collaboration includes giving Note users the ability to receive and respond to text messages and take phone calls from a Windows computer. Apple has long offered similar features, but only for its own devices such as the iPhone and Mac. /gsg