Sprinting to the future: Robo-shorts that help runners get ahead 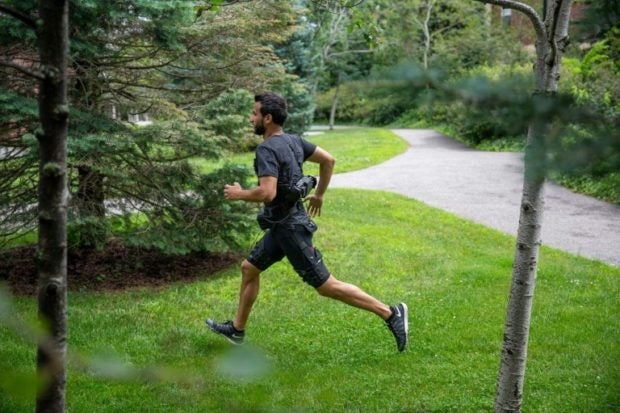 The entire get-up includes a battery that straps around the waist and a motor on the lower back that connects to pull-cables. Image: Harvard University/Wyss Institute via AFP

Once confined to comic books, exo-suits that enhance a wearer’s physical abilities took a step forward on Thursday, Aug. 15, as researchers unveiled a pair of robotic shorts that assist in walking and running.

The entire get-up, which includes a battery that straps around the waist and a motor on the lower back that connects to pull-cables, weighs just five kilograms (11 pounds) and detects its wearer’s gait to appropriately adjust its output.

Walking and running are very different activities from a biomechanical viewpoint, and previous devices had focused on boosting one or the other but not both, co-author Conor Walsh from Harvard’s Wyss Institute for Biologically Inspired Engineering told AFP.

“So I think it is a step towards these devices, not only helping with a single activity but devices that eventually can help people in their everyday lives, in many different ways across many different activities,” he said.

The breakthrough required developing a control algorithm that used three sensors to detect with 99% accuracy what the wearer was doing and respond accordingly.

In a paper published in the journal Science on the same day, the team from Harvard University and the University of Nebraska Omaha wrote that the suit reduces the average energy cost of walking by 9.3% and running by 4.0%, a range of improvement that has been shown to be meaningful in athletic performance.

The exo-suit was put through its paces in a variety of environments, from the treadmill to the running track to hiking up a hill, and Walsh said its battery will last for up to 10 kilometers (six miles) of walking and jogging.

This particular version is focused on augmenting healthy people, and Walsh said he envisaged it could find use in outdoor activities, or “a soldier or someone who is overburdened, being able to kind of allow them to be less fatigued when they get to their end destination.”

It received funding from the Defense Advanced Research Projects Agency.

But the team is also investigating future devices that may help stroke survivors who have suffered a loss of mobility to walk more symmetrically, efficiently and faster.

They are working with a commercial partner called ReWalk Robotics in obtaining regulatory approval to bring a medical device to the market in the coming years, and estimate it will sell for around $30,000 (over P1 million).

The non-medical version that could assist factory workers or other occupational settings will be made available through a startup to be launched this fall from Harvard.

So-called “soft exo-suits” that use textiles to fit more naturally on the human body represent an evolution from the more restrictive “hard exo-suits” of the past that are still used in therapeutic settings but can be awkward and inefficient.

Writing in a related paper in Science on the same day, Jose Pons from Northwestern University said the next logical step would be “implantable neuroprostheses” that would enhance the human-robot interface further by decoding electrical signals from the peripheral nervous system.

“Such devices would implement effective interfaces to decode the wearer’s movement intent and influence it when necessary to enhance human performance,” he said. HM/JB