BEIJING — No cash, no cards, no wallet, and no smartphones: China’s shoppers are increasingly purchasing goods with just a turn of their heads as the country embraces facial payment technology.

China’s mobile payment infrastructure is one of the most advanced in the world, but the new systems – which require only face recognition – being rolled out nationwide could make even QR codes seem old-fashioned.

Customers simply make a purchase by posing in front of point-of-sale (POS) machines equipped with cameras, after linking an image of their face to a digital payment system or bank account.

“I don’t even have to bring a mobile phone with me, I can go out and do shopping without taking anything,” said Bo Hu, chief information officer of Wedome bakery, which uses facial payment machines across hundreds of stores.

“This was not possible either at the earliest stage of mobile payment – only after the birth of facial recognition technology can we complete the payment without anything else,” he explains.

The software is already widely used, often to monitor citizens – it has been credited with nabbing jaywalkers and catching criminals.

But authorities have come under fire for using it to crack down and monitor dissent, particularly in China’s surveillance-heavy region of Xinjiang.

“There’s a big risk… that the state could use this data for their own purposes, such as surveillance, monitoring, the tracking of political dissidents, social and information control, ethnic profiling, as in the case with Uighurs in Xinjiang, and even predictive policing,” said Adam Ni, China researcher at Macquarie University in Sydney.

“This is certainly one of the more contentious aspects of the gathering of facial recognition data and the usage of them,” he added.

Despite the concerns over data security and privacy, consumers seem unperturbed as facial recognition payment hits the high streets.

Alipay – the financial arm of ecommerce giant Alibaba – has been leading the charge in China with devices already in 100 cities.

The firm is predicting enormous growth in the sector and recently launched an upgrade of its “Smile-to-Pay” system, using a machine roughly the size of an iPad.

Tencent, which runs the WeChat app with 600 million users, unveiled its new facial payment machine called “Frog Pro” in August, while a growing number of start-ups are trying to tap into the burgeoning industry.

“(Facial payment) certainly has the potential to become popular with the wide push from major mobile payment players,” said Mengmeng Zhang, an analyst at Counterpoint.

“Alipay is spending (billions) to popularise facial payment technology through giving out subsidies for vendors and rewards for consumers that use facial payment,” she added.

At the IFuree self-service supermarket in Tianjin, a 3D camera scans the faces of those entering the store – measuring width, height and depth of the faces – then another quick scan again at check-out.

“It’s convenient because you can buy things very quickly,” said retiree Zhang Liming after using the facial payment for her groceries.

“It’s different from the payment in the traditional supermarket, in which you have to wait in the checkout line and it’s very troublesome,” she argued. 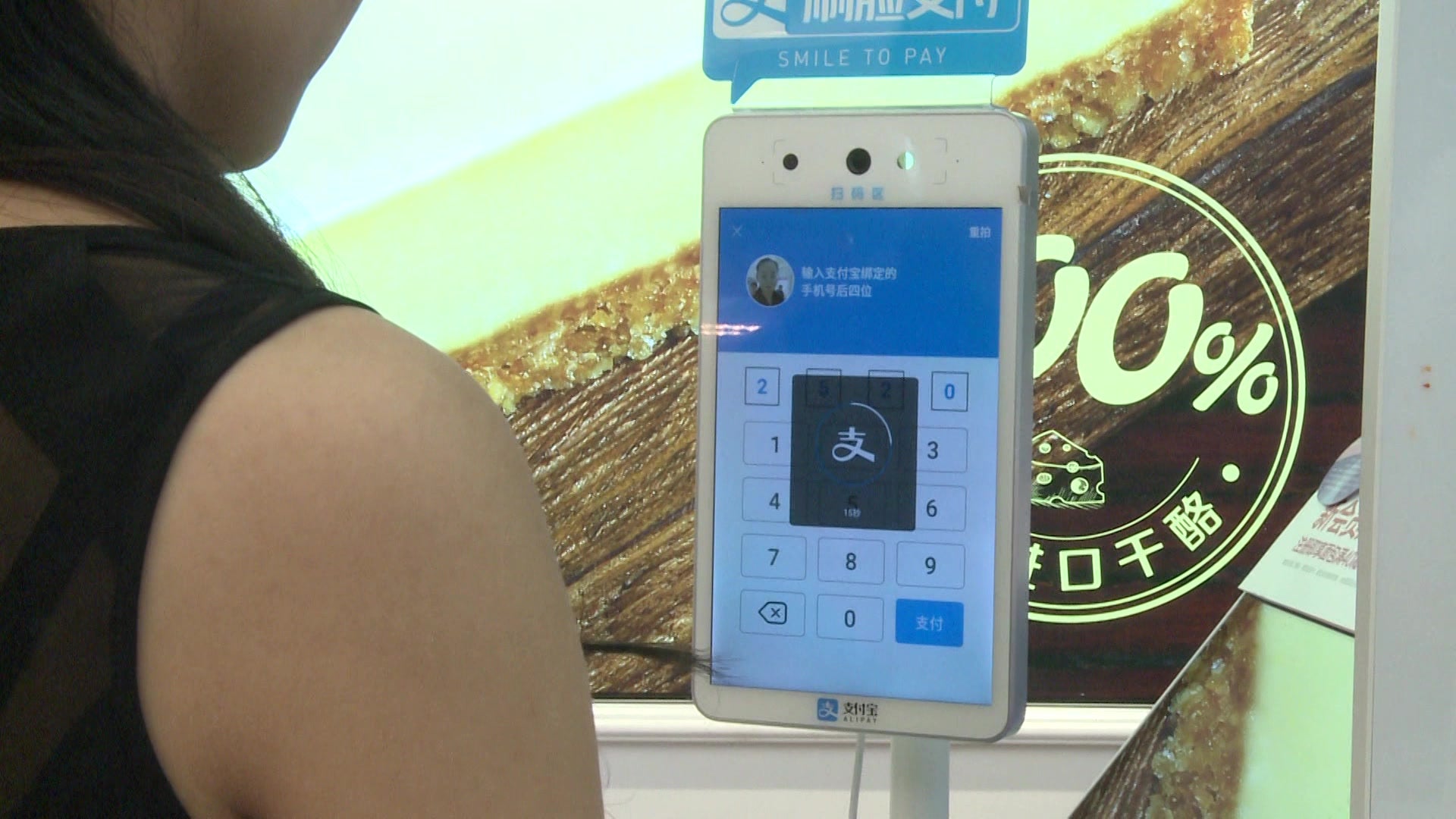 Bo Hu said 300 of his bakeries have facial payment systems, and he plans to introduce them in 400 more.

He believes it makes the checkout process more efficient, but concedes the numbers using the new technology are still modest.

“Much of the smart retail trend is company-driven for two ends in particular: to prevent shoplifting and to get better data on consumer preferences for analytics and marketing,” said Jeffrey Ding, researcher at the Center for the Governance of AI at Oxford University.

The technology also feeds into a broader state drive in China for smart tech and Artificial Intelligence.

“Implementation (of facial payment technology) at scale would fit with government’s broader plan to develop facial recognition as one of the pillars of the AI industry by providing tech companies with huge amounts of data – the faces themselves and use cases,” said Adam Segal, director at the Council on Foreign Relations.

“In the traditional way, it’s very dangerous to enter the password if someone stands beside you. Now we can complete the payment with our faces, which helps us secure our account,” he insisted.

But for many consumers, it is vanity rather than privacy that puts them off using such systems.

A poll by news portal Sina Technology found that over 60 percent of respondents said scanning their faces for payments made them feel “ugly.”

In response Alipay pledged to introduce “beautifying filters” into all the Alipay cameras.

The tech giant said: “Now your face will be more beautiful than using a beauty camera!” /kga