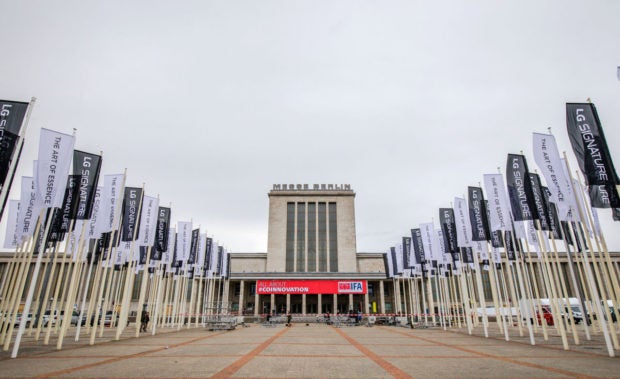 LG banners are placed at the venue of IFA in Berlin, Germany. (LG Electronics) via The Korea Herald

SEOUL — Only a day remains to the beginning of this year’s IFA, Europe’s biggest annual trade show for consumer electronics in Berlin, Germany.

IFA organizers Messe Berlin and gfu Consumer & Home Electronics said at this year’s exhibition artificial intelligence will set the tone for trends. Many types of devices using AI are self-teaching and able to improve their performance for the user’s benefit.

Consumers can expect a wealth of innovations and pioneering new products at IFA 2019, such as voice-controlled, interconnected devices for the smart home, ubiquitous embedding of artificial intelligence in products, TVs with next-level clarity, folding and flexible screens, as well as new forms of mobility, wearable health care devices and a brand new gaming trade tour.

Both the show on the Berlin Exhibition Grounds with its brands and IFA Global Markets at Station Berlin, reserved for trade visitors only, are fully booked, IFA organizers said. Over 1,800 companies are bringing their most prized technologies to IFA.

As for Korea, more than 100 firms are taking part in this year’s opportunity to showcase their latest solutions to European consumers and buyers, including Samsung and LG Electronics, the representative names for Korean home appliances and technology.

Samsung and LG are expected to bring along foldable smartphones, rollable TV screens and internet of things home appliances.

IFA attendees will hear keynote speeches from a slew of global CEOs on their reactions to the latest technological and political challenges.

Chengdon Yu, CEO of Huawei Consumer Business Group, and Cristian Amon, president of US chip manufacturer Qualcomm, will discuss the future of 5G.

Anthony Wood, founder, chairman and CEO of Roku, considered to be the top competitor to Netflix, will deliver his views on the innovations to transform television viewing as we know it.

“Nowadays, more than ever before, innovations are the result of joint efforts … the greater the diversity, the more room there is for inspiration,” said Christian Goeke, CEO of Messe Berlin.

In an interesting twist to that statement, Japan, which has recently severed favorable trade conditions with Korea, is at IFA NEXT as its first partner country and an official IFA Global Innovation Partner.

The very first IFA dates back to 1924. IFA 2019 is the 59th event and will be held from Friday through Sept. 11 at Berlin ExpoCenter City.