Actor and former professional wrestler Dave Bautista is set to be part of the latest “Gears of War” installment, lending his likeness to the game’s multiplayer mode. 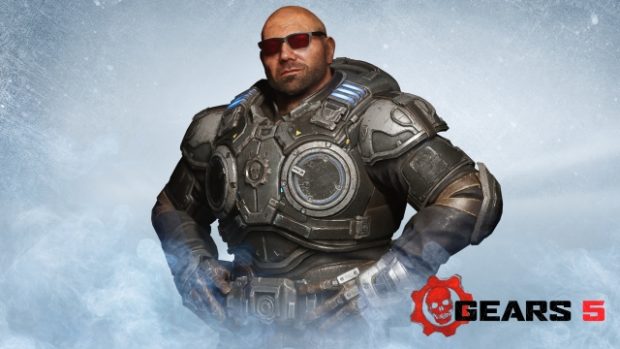 Before making it in the “Guardians of the Galaxy” and “Avengers” movies, James Bond film “Spectre”, and “Blade Runner 2049”, Dave Bautista spent eight years in the World Wrestling Entertainment (WWE) franchise, performing under the ring name Batista.

It is Batista, also known as The Animal, who is making a comeback for the “Gears 5” multiplayer mode, dressed as he is in the power armor worn by series lead Marcus Fenix.

As Xbox’s own announcement points out, Bautista has previously suggested himself as a candidate for the in-development “Gears of War” movie, while the WWE Network is involved in the promotion for “Gears 5”.

The promotional crossover between “Gears 5” and the WWE Network extends to cover a Sept. 15 broadcast event called Clash of Champions.

The “Gears 5” Batista character will become unlockable from within the game that day, remaining available until Oct. 28.

The game already has a collaboration in place with the upcoming action movie “Terminator Dark Fate”, whereby franchise characters Sarah Connor and the T-800 Terminator become available to use for those that play “Gears 5” before Sept. 16. RGA/JB

Dave Bautista on joining ‘Fast and Furious’ spin-off: ‘I’d rather do good films’