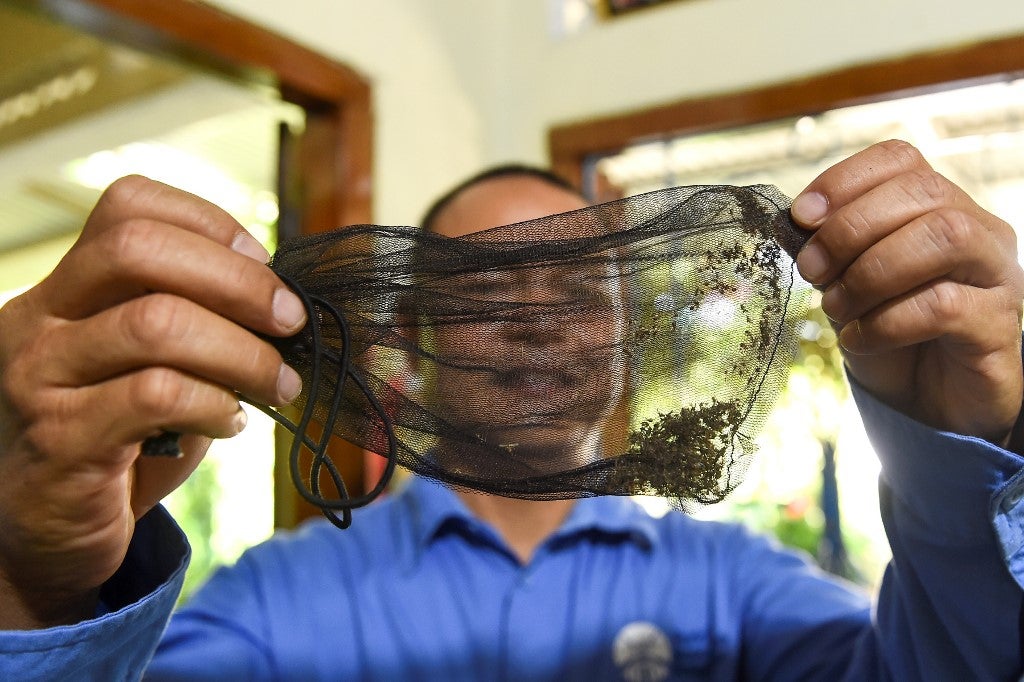 In this photo taken on August 21, 2019, shows field officer Luu Quoc Hung from the non-government organization World Mosquito Program holding a bag of mosquitoes in the southern Vietnamese city of Nha Trang. – Hundreds dead in the Philippines; a threefold increase of cases in Vietnam; hospitals overrun in Malaysia, Myanmar, and Cambodia — dengue is ravaging Southeast Asia this year due in part to rising temperatures and low immunity to new strains. (Photo by Nhac NGUYEN / AFP) / TO GO WITH Vietnam-Singapore-Malaysia-Philippines-health-dengue-science, FEATURE by Jenny VAUGHAN

Nha Trang, Vietnam — Hundreds dead in the Philippines; a threefold increase of cases in Vietnam; hospitals overrun in Malaysia, Myanmar and Cambodia – dengue is ravaging Southeast Asia this year due in part to rising temperatures and low immunity to new strains.

But one group of scientists is rolling out trials to breed dengue-resistant bugs in a bid to tackle one of the world’s leading mosquito-borne illnesses, raising hopes the untreatable disease can finally be beaten.

The World Mosquito Program (WMP) has pioneered a method where male and female Aedes Aegypti mosquitoes are infected with the disease-resistant bacteria called Wolbachia before being released into the wild.

In a matter of weeks, baby mosquitoes are born carrying Wolbachia, which acts as a disease buffer for the bugs – making it harder for them to pass on not only dengue, but Zika, chikungunya, and yellow fever.

First trialed in northern Australia, it’s been tested in nine countries around the globe, including in Vietnam where early results are promising.

“We have seen a remarkable reduction of dengue cases after the release,” explained Nguyen Binh Nguyen, project coordinator for WMP in Nha Trang.

His team set free around half a million Wolbachia-infected mosquitoes last year in Vinh Luong, a crowded dengue-prone district in southern Vietnam.

Since the trials, dengue cases are down 86 percent in Vinh Luong compared to nearby resort town Nha Trang.

That’s a major relief for Cong Thi Thu, an accountant who along with her two children suffered an intense bout of dengue in 2016, flooring the family for weeks.

She worries less after the trials but still makes her kids sleep under nets and no longer leaves stagnant water to collect in the pots around her garden, which offer ideal breeding grounds for mosquitoes.

“I feel at ease now, 70 to 80 percent safe, but I still have to be careful,” Thu said from her leafy compound.

Today, mosquitoes still buzz about in the open-air shops, cafes, and homes of Vinh Luong, but the majority in the test areas now carry Wolbachia compared to none before the trials, WMP said.

Convincing wary residents like Thu, along with health officials and ethics boards, that the mosquitoes won’t make them sick was not an easy task.

Residents have long subscribed to the official motto “no mosquitoes, no larvae, no dengue” to avoid the virus, dubbed “break-bone fever” because of its severe flu-like symptoms.

Dengue is passed along to humans by infected mosquitoes, which thrive in crowded, hot and humid neighborhoods like Thu’s.

Cases have surged not only in Vietnam this year but across Southeast Asia, with around 670,000 infected and more than 1,800 people dead in the region, according to an AFP tally of national and World Health Organization data.

Warmer weather is one factor – temperatures in July 2019 were the hottest ever recorded globally, and mosquitoes love hot weather – coupled with the introduction of new dengue strains that have spread among populations with no immunity.

Long-term trends are also at play: breakneck urbanization in Asian megacities, a massive increase in international travel and trade, and the cyclical nature of outbreaks.

“That creates the perfect ingredients for the dengue epidemic to happen,” Rachel Lowe, assistant professor at the London School of Hygiene & Tropical Medicine, told AFP.

Even the widespread use of plastics has contributed – as things like garden pots and takeout containers collect water they create perfect breeding pools for mosquitoes. 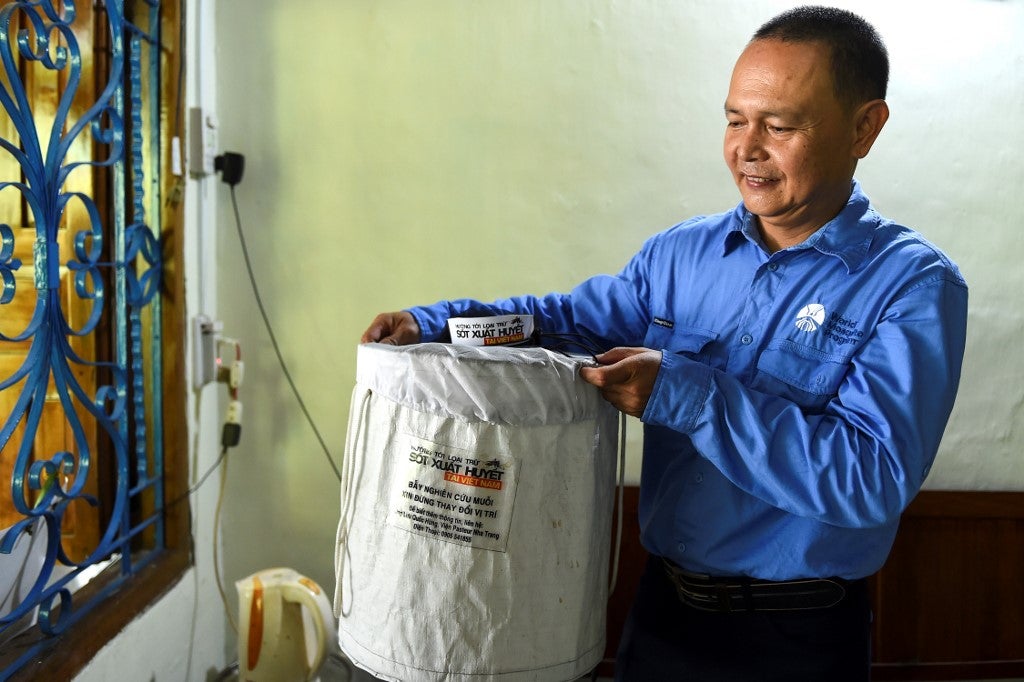 This photo taken on August 21, 2019 shows field officer Luu Quoc Hung from the non-government organisation World Mosquito Program collecting mosquitoes in the southern Vietnamese city of Nha Trang. – Hundreds dead in the Philippines; a threefold increase of cases in Vietnam; hospitals overrun in Malaysia, Myanmar and Cambodia — dengue is ravaging Southeast Asia this year due in part to rising temperatures and low immunity to new strains. (Photo by Nhac NGUYEN / AFP) / TO GO WITH Vietnam-Singapore-Malaysia-Philippines-health-dengue-science,FEATURE by Jenny VAUGHAN

Wolbachia was first discovered by scientists in the 1920s in mosquitoes living in the drainage system beneath the Harvard University School of Public Health.

Found in 60 percent of all insect species – including dragonflies, fruit flies, and moths – the bacteria was mostly ignored until the 1970s when researchers discovered it could be used to prevent the spread of disease by bugs.

Over the years scientists have conducted anti-dengue experiments with Wolbachia laden mosquitoes with varied success, but now WMP hopes its approach will stick.

It is one of the only organizations in the world seeking to repopulate colonies with Wolbachia-infected mosquitos to fight dengue, estimated to spread to as many as 100 million people globally every year.

Other groups, including in Singapore and Malaysia, are using Wolbachia but only in male mosquitoes which render female eggs infertile – a method that aims to suppress the mosquito population, which rarely lasts.

Many countries are also fogging neighborhoods with insecticides – effective in the short term, though the mosquitoes often come back in just a few days, or develop resistance to the chemical killers.

“No one has been able to get long-lasting suppression because the mosquitoes just keep re-invading,” said WMP director Scott O’Neill.

Results from WMP’s Wolbachia trials in northern Australia and on the Vietnamese island Tri Nguyen have been positive – local dengue transmissions are almost non-existent – and outcomes from trials in Indonesia are expected in the next year.

But experts said more long-term, and large-scale, studies are needed to see if the approach really works.

Dr. Raman Velayudhan, the coordinator of WHO’s global control program on dengue, said: “Our bottom line is to make sure that it leads to the reduction of the disease.”