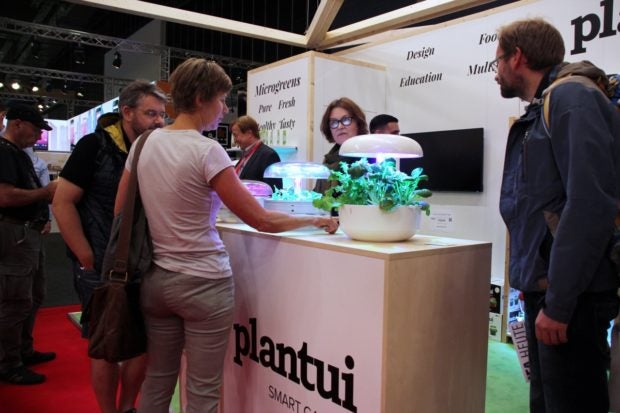 BERLIN — Large home appliances took the center stage at IFA 2019, but on the sidelines there were also the sections that spotlighted health care, gaming and home gardening.

Called the Smart Gardens, the Plantui devices are equipped with intelligent light-emitting diodes and automatic water pumping system, which allows anyone to grow fresh greens all year round, indoors.

“We have different combinations of lights and irrigation for germination, growth and harvest phase,” said Simon Gouaillardeu, head of Plantui’s eCommerce and digital marketing.

The patented photosynthesis lights vouch for fast growth of the plants and as no soil is used in the smart garden, the plants can be directly consumed from the pot.

For now, the company offers six-socket pot and three-socket pot, with a microgreens pot in the prelaunch stage.

There are about 40 different plant capsules on the menu, ranging from herbs, salad greens to edible flowers. The company recently added chili and cherry tomatoes to the list, and is testing strawberries.

Depending on the plant, the time needed for full growth ranges from three to five weeks “fast grower,” five to eight weeks “medium grower,” eight to 12 weeks “slow grower” and more than 12 weeks “long living.”

As the plants grow in height, additional height blocks must be added to make the pot taller.

Founded in 2012, Plantui is a Food Tech company that believes gardening can make the world a happier and greener place. With “Everyone deserves a garden,” as a motto, the company launched its first product, Plantui 6 hydroponic indoor garden, in 2014 in Denmark and Finland.

Plantui introduced its new Smart Microgreens garden device at IFA 2019. This new garden uses a tray specifically for microgreens growth, and if one already has the six-socket Smart Garden, simply purchasing the tray would do.

Microgreens are superfood vegetables packed with vitamins, minerals and antioxidants. They can be harvested within seven days of seed planting in Plantui’s smart device. On the Plantui website, the garden is marked as “coming soon.”

IFA 2019, meanwhile, closed Wednesday after a six-day run, with 5G and Samsung’s foldable phone having stolen the limelight.