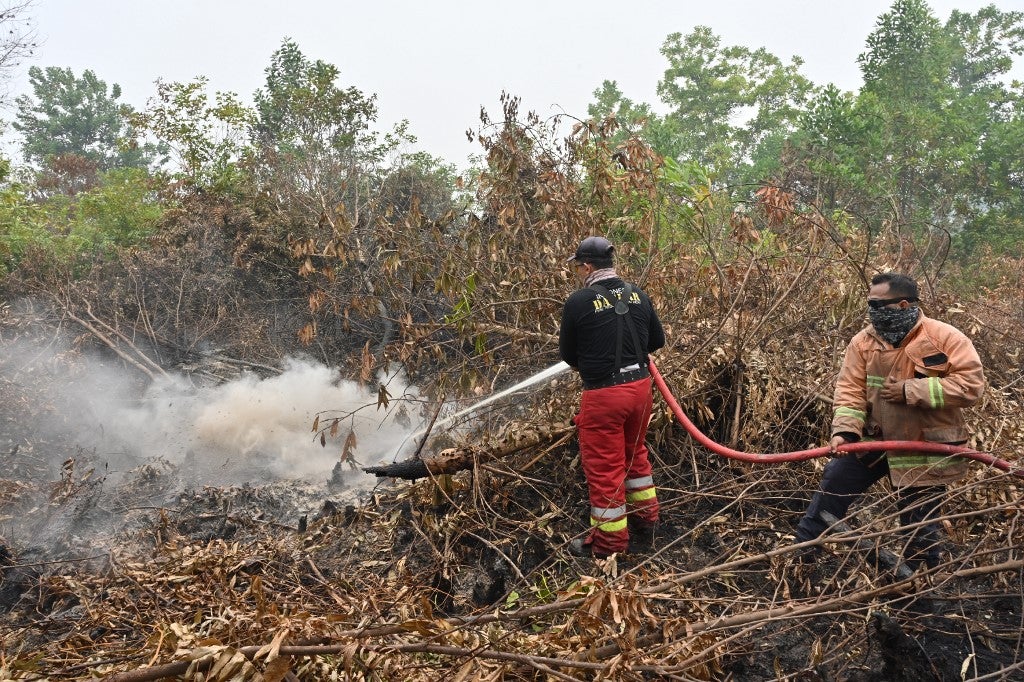 Indonesian firefighters spray water to help extinguish a fire in Kampar, Riau province on September 13, 2019. – The number of blazes in Indonesia’s rainforests has jumped sharply, satellite data showed on September 12, spreading smog across Southeast Asia and adding to concerns about the impact of increasing wildfire outbreaks worldwide on global warming. (Photo by ADEK BERRY / AFP)

Pekanbaru, Indonesia — With fierce blazes raging in jungles from the Amazon to Indonesia, concerns are mounting about the impact as rainforests play a vital role in protecting the planet against global warming.

The latest serious outbreak is in Indonesia, where smog-belching fires started to clear land for agriculture are burning out of control, blanketing the region in toxic smog.

Why are rainforests important in the fight against global warming?

Mankind’s reliance on fossil fuels usually receives much of the blame for climate change but scientists say that deforestation has also played a big role.

Forests are natural buffers against climate change, as they suck greenhouse gas carbon dioxide out of the atmosphere.

But forests worldwide have been logged on an industrial-scale over the decades for timber and to make way for agricultural plantations.

At the peak of Indonesia’s 2015 forest fires – the worst in the country for two decades – the country spewed more greenhouse gases into the atmosphere each day than all US economic activity for the same period, according to environmental watchdog the World Resources Institute (WRI).

How much of Indonesia’s rainforests have been destroyed?

Greenpeace estimates that in the past 50 years, more than 74 million hectares (182 million acres) of Indonesia’s biodiverse rainforests — an area twice the size of Germany – have been chopped down, degraded or burned.

They have often been destroyed to make way for plantations for the lucrative palm oil and pulpwood industries, particularly on Sumatra and Borneo islands, with fires often started illegally to clear land.

Indonesia suffers forest fires annually but this year’s appear to be the worst since 2015. The country’s disaster agency estimates that from January to August, about 328,000 hectares (810,000 acres) of land were burned.

However, the country has managed to slow the rate of deforestation in recent years. 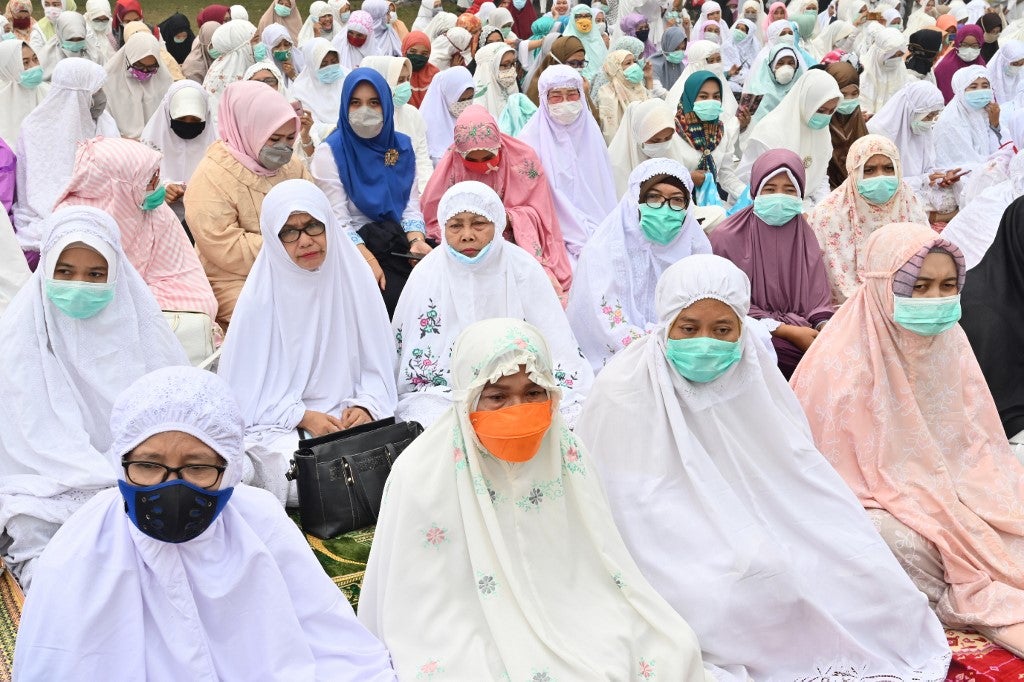 Indonesian Muslims, most seen wearing pollution masks, gather for special prayers asking for rain in Pekanbaru, Riau province on September 13, 2019, as smog from rainforest fires envelop the Southeast Asian region. – Hundreds of people held a mass prayer for rain in a smoke-filled Indonesian city on September 13, desperately hoping for downpours to extinguish forest fires and clear the toxic haze covering wide swathes of the country and neighbouring Malaysia. (Photo by ADEK BERRY / AFP)

Why are they burning and can it be stopped?

Farmers and plantation owners are usually blamed for starting the fires as a quick and cheap way to clear land.

Major companies typically deny starting blazes and instead point to small-scale farmers and villagers. The most serious fires occur in peatlands, which are highly combustible when drained of water to be converted into plantations.

The situation this year has been worsened by drier weather in Indonesia. Authorities have deployed thousands of security forces to battle the blazes but most believe only the start of the rainy season – usually in October – will douse them.

After the 2015 fires, President Joko Widodo’s government took steps to prevent a repeat of the catastrophe.

Authorities have tried to improve law enforcement to catch those responsible for illegal burning and set up an agency to restore degraded peatlands, which should make them less vulnerable to being set ablaze.

Arief Wijaya, from the Indonesia branch of WRI, told AFP that improving the lot of poor communities who have long turned to burning land for agriculture is also important.

“If you really want to prevent the fires from happening, you need to improve local livelihoods,” he said. 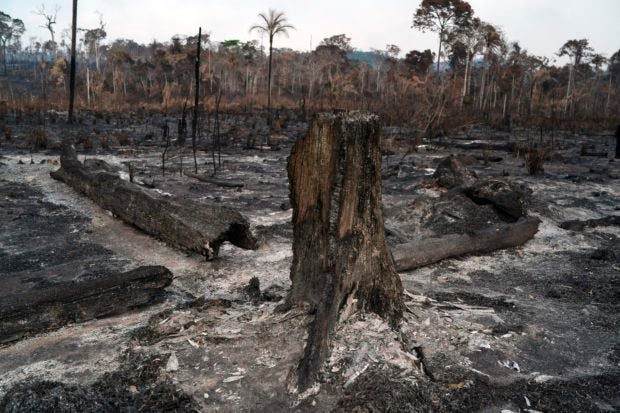 Trees are destroyed after a fire in the Alvorada da Amazonia region in Novo Progresso, Para state, Brazil, Sunday, Aug. 25, 2019. The country’s satellite monitoring agency has recorded more than 41,000 fires in the Amazon region so far this year, with more than half of those coming in August alone. (AP Photo/Leo Correa)

How does this compare to the fires in the Amazon?

The fires in Indonesia are far smaller than those in the Amazon, the world’s biggest rainforest.

Wildfires in Bolivia have torched two million hectares (4.9 million acres) of forest and grassland since August while in Brazil 88,816 fires were recorded from January to the end of August, over half of them in the rainforest.

What will be the impacts for global warming if forests keep burning?

It calls for rises to be limited to within a safer limit of 1.5°C – but the United Nation’s Intergovernmental Panel for Climate Change warned last year that at current levels of greenhouse gas emissions, we could pass this marker as early as 2030.