Farmers, chefs fight to save classic ingredients in Mexican cuisine 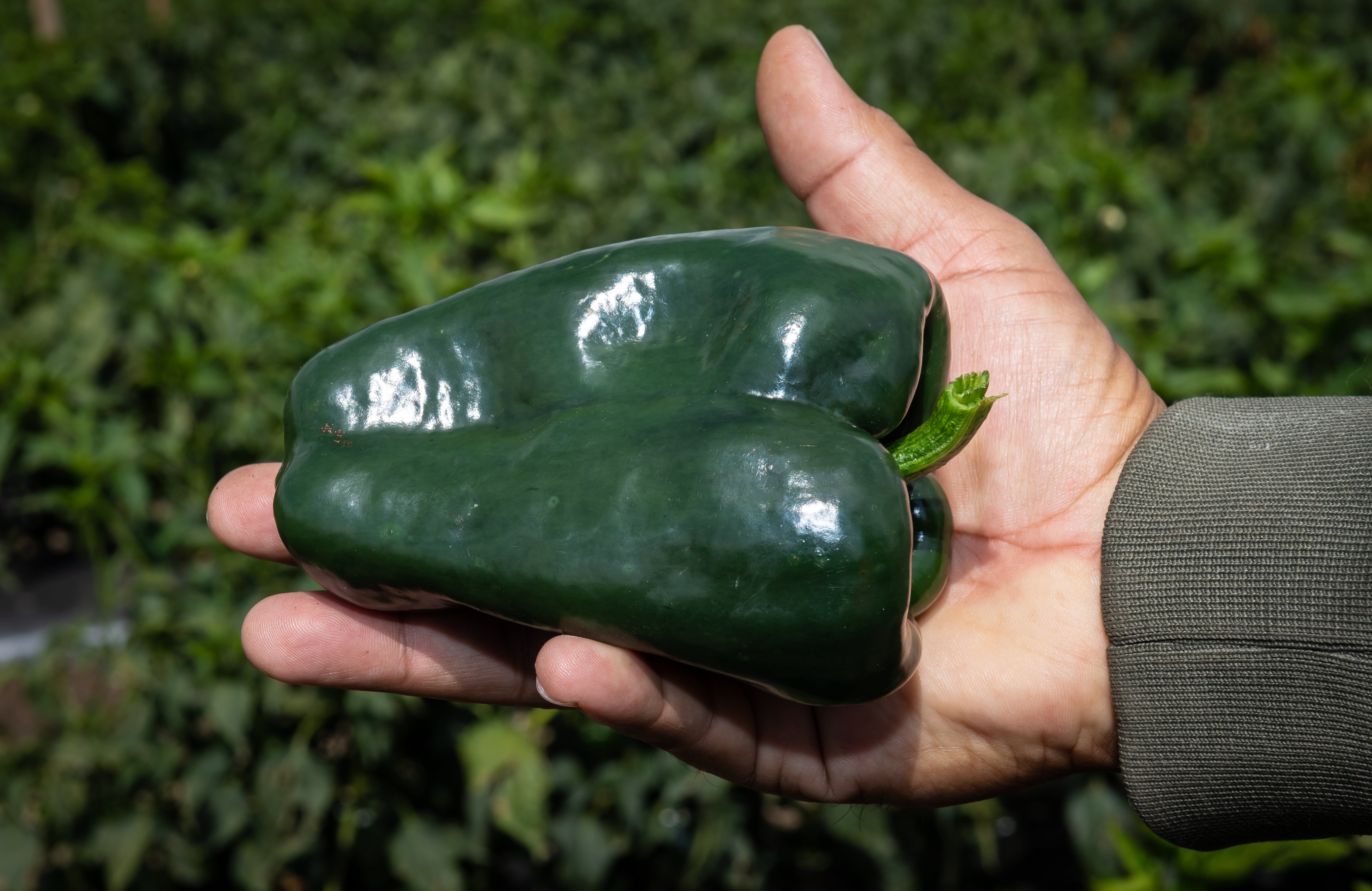 Mexican engineer Asuncion Diaz shows a “Poblano” chili pepper -used to make the traditional “Chile en Nogada”- at his plantation in San Andres Calpan, Puebla state, Mexico on September 9, 2019. – Chefs and peasants have taken steps to rescue the “knowledge and flavors” of Mexican gastronomy, since climate change, new consumer patterns, and the importation of hybrid fruits and seeds are threatening ingredients of this renowned cuisine. (Photo by Omar TORRES / AFP)

SAN ANDRES CALPAN, Mexico — Speaking against a backdrop of two soaring, snow-capped volcanoes, Asuncion Diaz explains his fight to save the original poblano chile, one of the most important ingredients in Mexican cuisine, from climate change and other threats.

The pristine panorama notwithstanding, Diaz and other producers in Puebla say climate change is stalking this mountainous region in central Mexico and threatening the dark green chile pepper for which it is famous.

“The chiles get burned by the sun, and if it rains they go bad,” says Diaz, a 55-year-old agricultural engineer, taking a break from work on his plantation outside San Andres Calpan, a village nestled in the skirts of the region’s twin volcanoes, Popocatepetl and Iztaccihuatl.

Looking up at the first volcano, which locals affectionately call “Popo,” fellow farmer Hilda Cruz concurs that the region is heating up.

“When I was a little girl, Popocatepetl had snow year-round. I was 35 when I saw it without snow for the first time. It made me cry,” says Cruz, now 64.

The disappearing snow has been caused in part by increased volcanic activity inside Popo’s crater. But Mexico’s environment ministry says climate change is also wreaking havoc on the region, causing droughts, frost and heavy precipitation.

Cruz runs a cooperative that helps local farmers sell their produce directly to some of Mexico’s most famous restaurants.

She says her mission is to save the “saberes y sabores” — the knowledge and flavors — of traditional Mexican food.

Climate change is just one of the threats facing the ingredients of Mexico’s renowned cuisine, which was named an essential part of the world’s cultural heritage by UNESCO in 2010.

Hybrid seeds, globalization and consumers’ demand for immaculate produce are also taking their toll on ingredients like the poblano, which is used in Puebla’s luscious “mole” — a spicy, chocolatey sauce — and in “chiles en nogada,” an iconic dish associated with Mexican Independence Day, September 16.

Diaz says the poblano has also taken a hit because of the arrival of hybrid seeds imported from China that grow year-round and are more weather-resistant — but also yield less-tasty, less-crunchy peppers.

“We’re losing the tradition of the original chile, the one our ancestors ate,” he told AFP.

Biting into a classic chile poblano at a family dinner in Mexico City, Enrique Garcia closes his eyes in bliss. He agrees.

“I haven’t eaten one like this since I was a boy. They’re like my grandmother’s — the texture, the thickness, the crunchiness,” says Garcia, 49.

According to the World Wildlife Fund (WWF), which launched a campaign last month to save Mexico’s classic ingredients, six out of every 10 chiles consumed in the country today come from Chinese seeds.

But now some farmers and chefs are fighting back to save Mexico’s indigenous chiles, beans, tomatoes, gourds, maize and more.

They include star chef Ricardo Munoz Zurita, the man behind “Azul,” one of Mexico City’s top restaurants.

Every year in August and September — chile en nogada season — he regales customers with his lavish take on the traditional dish. It is a symbol of Mexico with its green peppers bathed in creamy white sauce and topped with red pomegranate seeds — the colors of the Mexican flag.

Munoz buys his chiles from Diaz’s plantation, which meticulously protects its crop from hybrid seeds.

“They are saving the chile poblano,” says the chef.

But he is worried about many of the other 31 ingredients in the traditional chile en nogada, which is stuffed with a mixture of ground meat and fruits.

Original versions of those ingredients are increasingly scarce, in part because consumers have come to prefer imported hybrids.

“One of the reasons they’re in decline is their size. They’re tiny. These days everyone’s looking for the ‘ideal’ of big, shiny fruit,” he says.

But they are fooling themselves, he adds: the native version is sweeter and tastier. /muf