CAPTAIN COOK, Hawaii — At the edge of an ancient lava flow where jagged black rocks meet the Pacific, small off-the-grid homes overlook the calm blue waters of Papa Bay on Hawaii’s Big Island – no tourists or hotels in sight. Here, one of the islands’ most abundant and vibrant coral reefs thrives just below the surface.

Yet even this remote shoreline far from the impacts of chemical sunscreen, trampling feet and industrial wastewater is showing early signs of what’s expected to be a catastrophic season for coral in Hawaii.

Just four years after a major marine heatwave killed nearly half of this coastline’s coral, federal researchers are predicting another round of hot water will cause some of the worst coral bleachings the region has ever experienced.

“In 2015, we hit temperatures that we’ve never recorded ever in Hawaii,” said Jamison Gove, an oceanographer with the National Oceanic and Atmospheric Administration (NOAA). “What is really important – or alarming, probably more appropriately – about this event is that we’ve been tracking above where we were at this time in 2015.”

Researchers using high-tech equipment to monitor Hawaii’s reefs are seeing early signs of bleaching in Papa Bay and elsewhere caused by a marine heatwave that has sent temperatures soaring to record highs for months. June, July, and parts of August all experienced the hottest ocean temperatures ever recorded around the Hawaiian Islands. So far in September, oceanic temperatures are below only those seen in 2015.

In this Sept. 12, 2019 photo, fish swim near bleaching coral in Kahala’u Bay in Kailua-Kona, Hawaii. Just four years after a major marine heat wave killed nearly half of this coastline’s coral, federal researchers are predicting another round of hot water will cause some of the worst coral bleaching the region has ever seen. (AP Photo/Caleb Jones)

Forecasters expect high temperatures in the North Pacific will continue to pump heat into Hawaii’s waters well into October.

“Temperatures have been warm for quite a long time,” Gove said. “It’s not just how hot it is. It’s how long those ocean temperatures stay warm.”

Coral reefs are vital around the world as they not only provide a habitat for fish – the base of the marine food chain – but food and medicine for humans. They also create an essential shoreline barrier that breaks apart large ocean swells and protects densely populated shorelines from storm surges during hurricanes.

In Hawaii, reefs are also a major part of the economy: Tourism thrives largely because of coral reefs that help create and protect iconic white sand beaches, offer snorkeling and diving spots, and help form waves that draw surfers from around the world.

Ocean temperatures are not uniformly warm across the state, Gove noted. Local wind patterns, currents and even features on land can create hot spots in the water.

“You have things like two giant volcanoes on the Big Island blocking the predominant trade winds,” making the island’s west coast, where Papa Bay sits, one of the hottest parts of the state, Gove said. He said he expects “severe” coral bleaching in those places.

“This is widespread, 100% bleaching of most corals,” Gove said. And many of those corals are still recovering from the 2015 bleaching event, meaning they are more susceptible to thermal stress.

According to NOAA, the heat wave’s causes include a persistent low-pressure weather pattern between Hawaii and Alaska that has weakened winds that otherwise might mix and cool surface waters across much of the North Pacific. What’s causing that is unclear: It might reflect the atmosphere’s usual chaotic motion, or it could be related to the warming of the oceans and other effects of human-made climate change.

Beyond this event, oceanic temperatures will continue to rise in the coming years, Gove said. 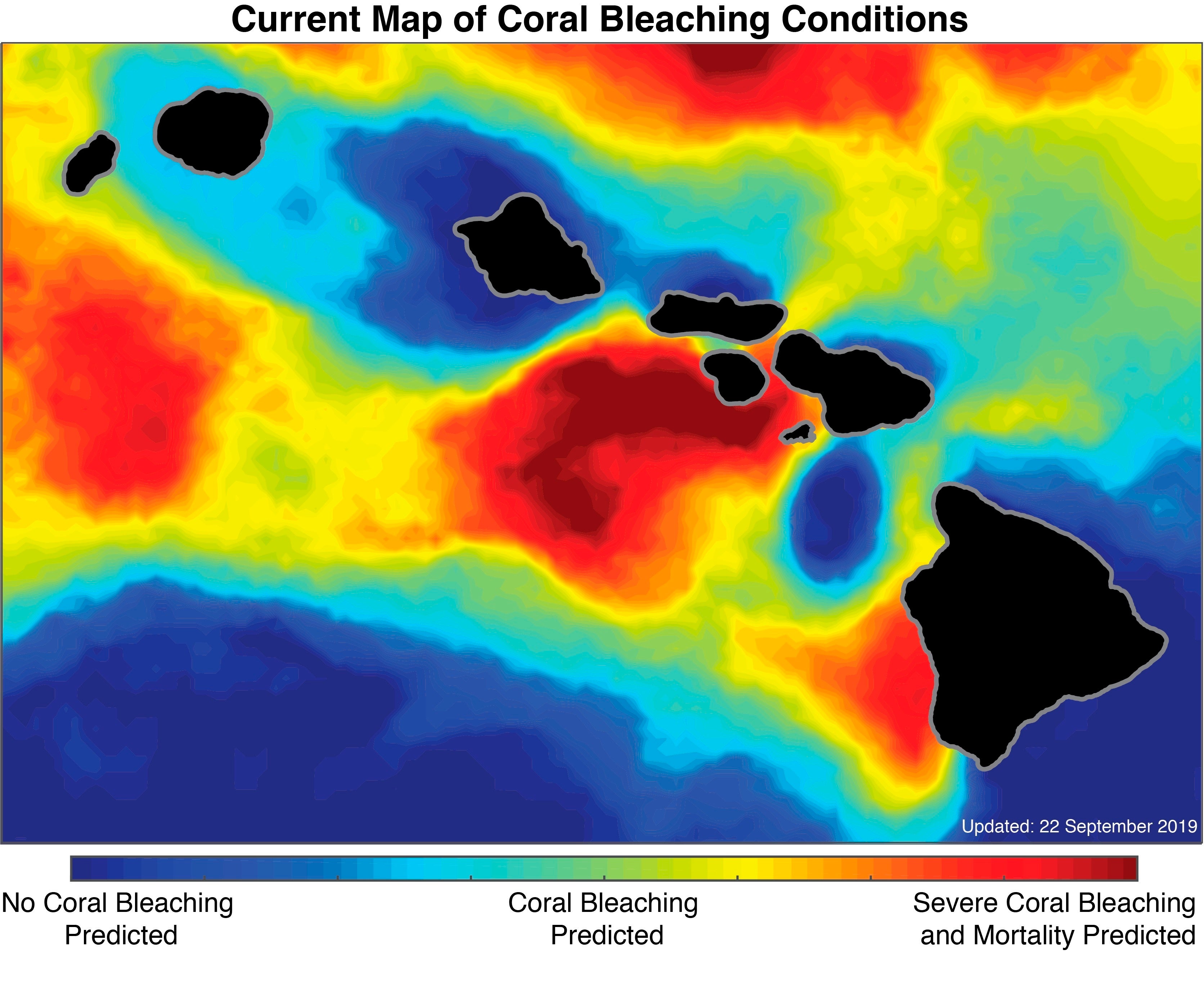 This image provided by the National Oceanic and Atmospheric Administration, shows a Sept. 22, 2019, map of coral bleaching conditions in Hawaii. Dark reds are locations that scientists say will experience widespread and severe coral bleaching. Green and yellow portions of the map indicate areas that will have have moderate coral bleaching. A marine heat wave has engulfed the islands and is expected to persist into October. (NOAA via AP)

“There’s no question that global climate change is contributing to what we’re experiencing,” he said.

For coral, hot water means stress, and prolonged stress kills these creatures and can leave reefs in shambles.

Bleaching occurs when stressed corals release algae that provide them with vital nutrients. That algae also gives the coral its color, so when it’s expelled, the coral turns white.

Gove said researchers have a technological advantage for monitoring and gleaning insights into this year’s bleaching, data that could help save reefs in the future.

“We’re trying to track this event in real time via satellite, which is the first time that’s ever been done,” Gove said.

In remote Papa Bay, most of the corals have recovered from the 2015 bleaching event, but scientists worry they won’t fare as well this time.

“Nearly every species that we monitor has at least some bleaching,” said ecologist Greg Asner, director of Arizona State University’s Center for Global Discovery and Conservation Science, after a dive in the bay earlier this month.

Asner told The Associated Press that sensors showed the bay was about 3.5 degrees Fahrenheit above what is normal for this time of year.

He uses advanced imaging technology mounted to aircrafts, satellite data, underwater sensors, and information from the public to give state and federal researchers like Gove the information they need.

“What’s really important here is that we’re taking these (underwater) measurements, connecting them to our aircraft data and then connecting them again to the satellite data,” Asner said. “That lets us scale up to see the big picture to get the truth about what’s going on here.”

In this Sept. 11, 2019 photo, a green sea turtle swims near coral in a bay on the west coast of the Big Island near Captain Cook, Hawaii. Just four years after a major marine heat wave killed nearly half of this coastline’s coral, federal researchers are predicting another round of hot water will cause some of the worst coral bleaching the region has ever seen. (AP Photo/Brian Skoloff)

Scientists will use the information to research, among other things, why some coral species are more resilient to thermal stress. Some of the latest research suggests slowly exposing coral to heat in labs can condition them to withstand hotter water in the future.

“After the heatwave ends, we will have a good map with which to plan restoration efforts,” Asner said.

Meanwhile, Hawaii residents like Cindi Punihaole Kennedy are pitching in by volunteering to educate tourists. Punihaole Kennedy is the director of the Kahalu’u Bay Education Center, a nonprofit created to help protect Kahalu’u Bay, a popular snorkeling spot near the Big Island’s tourist center of Kailua-Kona.

The bay and surrounding beach park welcome more than 400,000 visitors a year, she said.

“We share with them what to do and what not to do as they enter the bay,” she said. “For instance, avoid stepping on the corals or feeding the fish.”

The bay suffered widespread bleaching and coral death in 2015.

“It was devastating for us to not be able to do anything,” Punihaole Kennedy said. “We just watched the corals die.” /kga