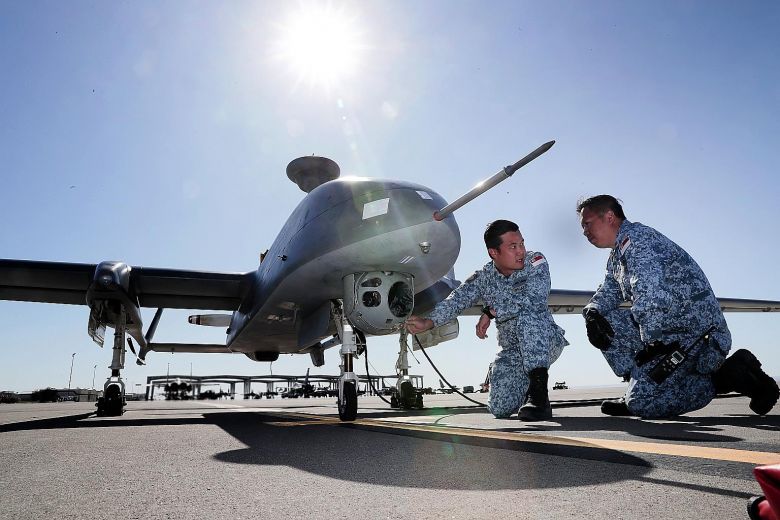 SINGAPORE — At a command post where the Singapore Armed Forces’ (SAF) strike operations are orchestrated, potential enemy targets appear on a video feed taken from a Heron 1 unmanned aerial vehicle.

These target vehicles are automatically marked and classified according to their threat level, based on factors such as the type of weapons they might be carrying.

This process, previously carried out by human operators, is now aided by artificial intelligence and video analytics with newly developed software known as the Automatic Target Detection module from the Defense Science and Technology Agency (DSTA).

This is one of the upgrades that the command post at Exercise Forging Sabre in the American state of Idaho has received this year, boosting the SAF’s ability to orchestrate strike operations swiftly.

The biennial integrated strike exercise, conducted at Mountain Home Air Force Base and involving around 600 soldiers, was held from Sept 30 to yesterday.

Another enhancement to the command post – the Target Look-Ahead capability – calculates how long it would take a target vehicle to reach an area where it can be taken out, using factors such as speed and direction.

The exercise’s air director, Colonel Aldrin Tan, who is also the overall-in-charge of the command post, said the enhancements help his staff come to a faster appreciation of a situation and they recommend decisions to him more quickly.

“Previously, my battle staff who communicate with the fighters really had difficulty estimating how much time it took for the target to reach their engagement area,” he noted.

“It was an educated guess – this looks like 2km, I think he’s travelling at 50kmh, then he does the maths – so it was more prone to errors. But now… the computer… displays how much time it takes for the target to get there.”

Senior Minister of State for Defence Heng Chee How witnessed the SAF conducting strike operations on multiple static and moving targets on Wednesday. He was accompanied by the Chief of Air Force, Major-General Kelvin Khong.

Mr Heng told reporters: “We’re able to do this because of the specific facilities that we are training in here in the United States.

“And the open expanse, as you can see, this is not something that we have in Singapore, and the ability for our forces to train in such terrain enables us to… hone our capabilities much better and faster.”

The Automatic Target Detection software is being tested for the first time in a major exercise at Forging Sabre.

DSTA engineer Joshua Lim, 24, who is part of the team that developed it, said that after observing the operators looking at the Heron 1 video feed, his team realised some processes could be automated to reduce the cognitive load.

He told reporters that the software works almost instantly: “One of the key considerations for this type of mission is how we cannot have any delay in the video, because the commanders have to make very timely decisions.”

However, human expertise still plays an important role in generating intelligence based on data gathered by the Heron 1.

Military Expert 4 (ME4) Joyce Tan, who is an air imagery intelligence expert, analyses still images to provide the why, where and how of potential targets – to deepen the command post’s understanding of the battlefield situation.
ME4 Tan, 29, said her role requires “a good eye for detail, and being able to remember if things have changed over time, such as whether potential targets have moved”.