Big Tech is now a big punching bag for politicians 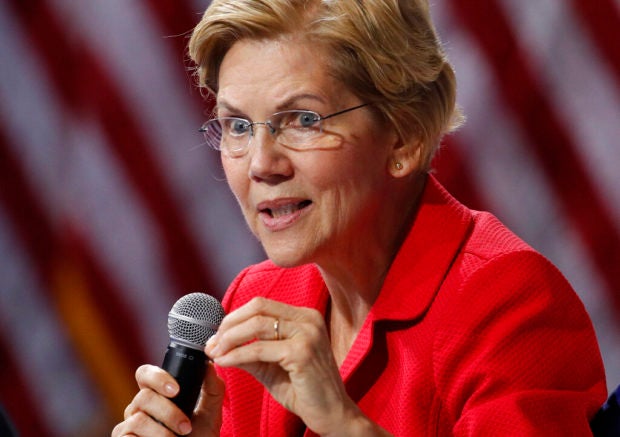 SAN FRANCISCO — Republicans and Democrats don’t agree on health care, immigration or taxing the rich. But one subject draws critics from both parties: Big Tech.

The list of grievances is long and growing by the week. Companies like Google, Facebook and Amazon are too big and powerful. They’re bad for privacy, public discourse, democracy and small business. They’re spying on us, contributing to economic inequality and hooking us and our children on addictive, useless services.

The companies themselves object to these characterizations, though how loudly they object varies.

Sen. Kamala Harris, a California Democrat, urged Twitter to suspend President Donald Trump’s account for violating the service’s rules, while Republican Sen. Josh Hawley of Missouri is battling what he considers tech companies’ bias against conservatives. Hawley has also told Facebook CEO Mark Zuckerberg that he should sell off WhatsApp and Instagram.

The companies are trying to maintain a neutral stance, even if that draws the ire of politicians as divergent as the president and those trying to impeach him. Behind the scenes, though, they are spending millions on lobbying in hopes of warding off breakups or intrusive regulation.

Not that there is any danger of either happening any time soon, especially with an ongoing impeachment probe. Still, talking up Big Tech’s problems has proven to be popular political rhetoric.

When it comes to policing content, social media services are “caught between a rock and a hard place,” said Andrew Guess, a Princeton University political scientist who studies social media and its effects on political opinion.

Blocking or suspending accounts for hate speech can prompt complaints of political bias or censorship, but a hands-off approach may be viewed as a free pass to politicians like Trump.

“Anything they do is going to attract criticism,” Guess said. “That, of course, makes them a target.”

Beyond discourse and privacy, antitrust concerns have emerged as a major concern for lawmakers and candidates. This wasn’t the case in 2016, when grumbling about the outsized power of tech was largely confined to activists and those on the most liberal end of the spectrum.

Leading the pack has been Sen. Elizabeth Warren, a Democratic presidential candidate who in March proposed breaking up big tech companies. She garnered immediate support, even from rivals such as Sen. Ted Cruz, a Texas Republican who retweeted Warren for what he said was the first time. Cruz said “she’s right — Big Tech has way too much power to silence Free Speech.”

Since then, calling out the tech behemoths and other big corporations has been a pillar of Warren’s presidential campaign. Sen. Bernie Sanders, another leading Democratic candidate, has also said breaking up Amazon, Google and Apple is “something we should definitely take a look at.”

Still, while there have been congressional hearings, investigations and fines, including a record $5 billion against Facebook, little has changed for Big Tech.

A Republican-controlled Senate is unlikely to pass legislation that seems too anti-business. That includes breaking up tech companies seen as too monopolistic. The same likely goes for any privacy law that restricts companies’ ability to target ads to their liking.

While the two parties agree that Big Tech has problems, they often differ on what those problems are — and how to fix them. You won’t find many Democrats complaining about tech’s perceived conservative bias, for instance. Nor will you find many conservatives complaining of algorithmic bias against people of color.

Trump has been uneven in his criticisms. Amazon has been a frequent target, though that is due in part to CEO Jeff Bezos’s ownership of The Washington Post. He’s met with Zuckerberg privately, but he’s also tweeted that “Facebook was always anti-Trump” and accused it of colluding with the news media against him.

Amid all this, at least in public, the companies have mostly kept a low profile. But there are occasional glimpses of behind-the-scenes activity. Leaked audio from an internal Facebook meeting in July captured Zuckerberg acknowledging that if “someone like” Warren is elected, he expects Facebook to fight back — and prevail — against efforts to break it up in court. But he added: “And does that still suck for us? Yeah.”

Amazon, by contrast, briefly tried to debate the candidates on Twitter.

In April, after Warren complained that Amazon and other big tech companies have “too much power,” the company responded by pointing the finger at its main rival: “Walmart is much larger; Amazon is less than 4% of U.S. retail.”

When Rep. Alexandria Ocasio-Cortez said in a TV interview in June that Amazon pays workers “starvation wages,” the company tweeted that she “is just wrong.”

And Amazon gave former Vice President Joe Biden a corporate tax lesson after he tweeted that it shouldn’t be paying a “lower tax rate than firefighters and teachers.”

“We pay every penny we owe,” Amazon tweeted back. “Congress designed tax laws to encourage companies to reinvest in the American economy. We have.”

This was in June. Amazon seems to have backed off since.

“It’s a bipartisan issue,” he said. “But the right and the left are criticizing it for different reasons.”