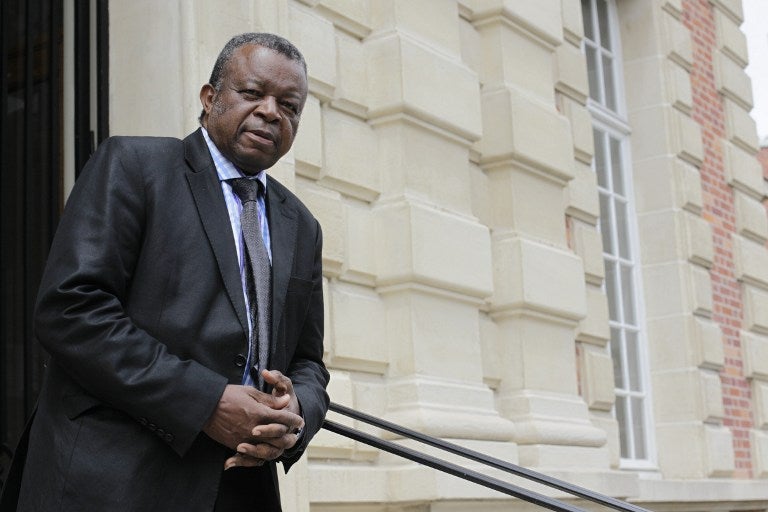 Director of the National Institute of Biomedical Research (INRB), Jean-Jacques Muyembe from Democratic Republic of Congo poses on May 28, 2015 in Paris. Dr Muyembe received the 2015 Christophe Merieux Prize for his search on Ebola. AFP PHOTO

Doctors will use a second Ebola vaccine from November in three eastern provinces in the Democratic Republic of Congo to fight the deadly virus, medical officials said Sunday.

It will arrive in the eastern city of Goma, in North Kivu province, on Oct. 18 and be used from the beginning of next month, he added.

DRC’s latest Ebola epidemic, which began in August 2018, has killed 2,144 people, making it the second deadliest outbreak of the virus, after the West Africa pandemic of 2014 to 2016.

Muyembe said the communes of Majingo and Kahembe had been selected to receive the vaccine as they were considered the epicentres of the epidemic.

“We will extend this vaccination to our small traders who often go to Rwanda to protect our neighbours,” he added. “If it works well, we will expand vaccination in South Kivu and Ituri.”

DR Congo’s eastern provinces of Ituri, North Kivu and South Kivu sit on the borders with Uganda, Rwanda and Burundi.

The Belgian laboratory will send a batch of 200,000 doses to neighboring Rwanda and 500,000 doses in the DRC, Muyembe said.

More than 237,000 people living in active Ebola transmission zones have received a vaccination produced by the pharma company Merck Sharpe and Dohme since Aug. 8, 2018.

The J&J vaccine had been rejected by DRC’s former health minister Oly Ilunga, who cited the risks of introducing a new product in communities where mistrust of Ebola responders is already high.

But Ilunga’s resignation in July appears to have paved the way for approval of the second vaccine. He currently faces charges that he embezzled funds intended for the fight against Ebola.

In his letter of resignation Ilunga said “actors who have demonstrated a lack of ethics” want to introduce a second vaccine, but did not elaborate.

Muyembe, who took over the Ebola fight in the DRC in July, said “The Johnson & Johnson vaccine has the most science-based data.” JB

Filipinos in Congo advised to remain cautious amid ebola outbreak

Too many in Congo’s Ebola outbreak are dying at home

Ebola survivors at higher risk of dying, even after recovery