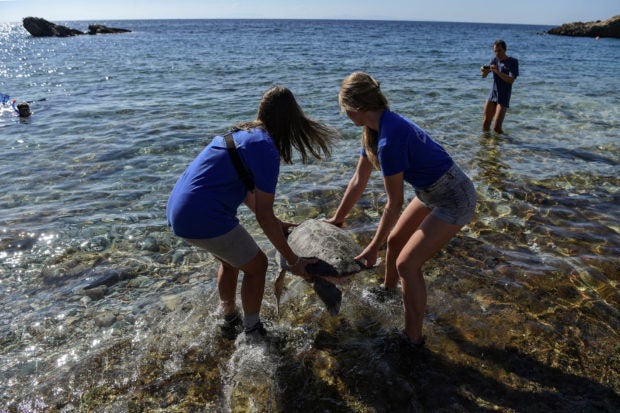 Volunteers of Archelon NGO release a loggerhead turtle (Caretta caretta) after its treatment, in a southern Athens suberb, on September 26, 2019. Named after the now-extinct giant sea turtle of the dinosaur age some 70 million years ago, the Archelon NGO was founded in 1983 and is active in over a dozen protected areas and nesting grounds around Greece. Image: AFP/Will Vassilopoulos

Freed from its eggshell by a volunteer, the tiny turtle hatchling clambers across a pebble-strewn sandy Greek beach in a race to the sea, the start of a hazardous journey that only one in 1,000 will survive.

Kira Schirrmacher, 22, donning black gloves to gently ease the newborn loggerhead turtle on its way, grins at suggestions that she’s a kind of “midwife.”

“Yes, I do that all day,” the German social sciences student confirmed her role.

Schirrmacher was one of several volunteers monitoring the beaches of Kyparissia Bay, the Mediterranean’s largest nesting ground for the loggerhead sea turtles, which had the scientific name Caretta caretta.

Tourism, climate change and good fortune all weigh on the future of the loggerhead population, which the International Union for Conservation of Nature listed as vulnerable.

Sun loungers on the beach that could snag the turtles and bright lights that could lure the hatchlings away from the water at night were potential threats, environmentalists said.

Growing in the Med

Their overall numbers are unknown, but their population in the Pacific and Indian Ocean are critically low. According to environmental groups, conservation measures have bolstered their presence in the Mediterranean.

With around 44 kilometers (27 miles) of coastline, Kyparissia on the western Peloponnese, had over 3,700 nests this year. This was 2,000 nest more compared to the 3,500 accounted for in 2018, the Athens-based Archelon turtle protection organization claimed.

“It seems (more of) our female turtles survive and come back to nest,” oceanographer, Dimitris Fytilis stated. Fytilis was also the head of the organization’s rescue center for injured turtles in the coastal Athens suburb, Glyfada.

Each nest contained up to 120 eggs but up to a fifth may fail to hatch at all.

In danger from birth

Loggerheads can live to 80 years of age, grow to more than half a meter (20 inches) and weigh up to 80 kilos (175 pounds), but they face mortal danger from birth. Newborns must evade dogs, jackals, foxes, seagulls and other predators just to make it to the sea.

Once in the water, the five-centimeter turtle will swim non-stop for at least 24 hours to work its lungs and find food. It is also prey to crabs, fish and even adult turtles. More than 600 turtles turn up dead in Greece every year, mostly on beaches, some also turn up in the water, trapped in nets or sick, said the rescue center. The rescue center has treated more than 1,100 injured turtles since it began in 1994. They receive at least 70 new cases every year.

Turtles ingest fishhooks and plastic debris, but more than half of their injuries are caused by humans, usually by blows to the head with oars and axes. Fishermen are often blamed as repairing fishing nets damaged by turtles can be costly. 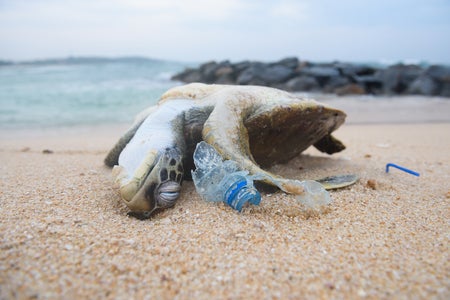 Dead turtle among plastic garbage from the ocean on the beach. INQUIRER.net stock photo

“There is already an effect in some countries… in Australia for example, more females are born now because of global warming,” Fytilis said.

Another key nesting ground at Laganas Bay, in Zakynthos on the Ionian island of Zante, attracts hundreds of thousands of tourists annually. But like in other popular tourist destinations, environmental groups have for decades tussled with hotels and restaurants that chafe against protection efforts.

“We don’t really get support from the locals,” said Schirrmacher, in Kyparissia. But one hotelier in the resort suggested the area should develop its turtle tourism.

“There should be a glass-bottomed boat for turtle watching, but the authorities here can’t even build a proper road to the beach,” he fumed.

Adding to ecologists’ concerns are moves by Greece’s new conservative government to relax environmental restrictions to promote further tourism investment. Plans to expand energy prospecting in the Ionian Sea and near Crete have also sparked anger.

World Wildlife Fund and Greenpeace warned last month that a planned lease of 50,000 square kilometers (20,000 square miles) of sea for oil exploration would endanger “emblematic tourism destinations… that contribute billions of euros and hundreds of thousands of jobs to the national economy.”

Archelon stressed that the turtles’ presence is a key indicator of seawater quality.

“We are fortunate to have these habitats. This is a natural treasure,” Fytilis warned. “It needs to be protected, not exploited.” CL/JB