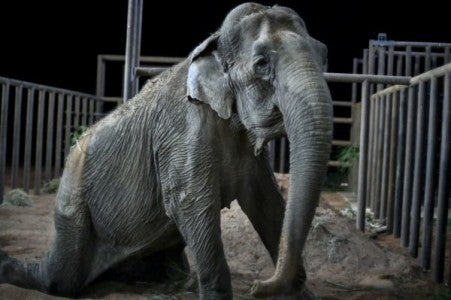 An Asian elephant that spent decades performing in South American circuses has started a new life in an open-air sanctuary in Brazil, after traveling thousands of kilometers by plane and truck from a Chilean zoo.

Ramba’s much-anticipated arrival at the 1,133-hectare (2,800-acre) Elephant Sanctuary Brazil in the central-western state of Mato Grosso late Friday was broadcast live on Facebook and viewed thousands of times.

Ramba is home at Elephant Sanctuary Brazil thanks to you all.

Posted by Global Sanctuary for Elephants on Friday, October 18, 2019

The elephant, estimated to be more than 52 years old, worked in circuses in Argentina and Chile before she was rescued by activists in 2012.

She was then kept in a roadside zoo in Rancagua, in central Chile, while her rescuers searched for a new home.

Her ordeal left her with abscesses as well as kidney and liver problems.

Ramba was flown to the Viracopos international airport near Sao Paulo on Wednesday — a day before heavily armed gunmen raided the cargo terminal in a daring heist.

She was then transported by flat-bed truck to the sanctuary in Chapada dos Guimaraes, which was opened in 2016 with the help of United States-based Global Sanctuary for Elephants (GSE), the first of its kind in Latin America.

Videos of Ramba’s road trip in Brazil were posted online. One shows her munching on watermelons in a metal crate on the back of a truck.

Ramba was accompanied by GSE chief Scott Blais as well as a veterinarian, volunteers and Brazilian federal police.

“Ramba needs a quiet place, one where she feels safe and is not on display, where she is surrounded by others of her kind who truly understand her and can help her to open her heart fully,” Blais said in a statement. “She needs sanctuary.” IB/JB

Popular panda on loan from China dies in Thai zoo

Owl vs. owl: Should humans intervene to save a species?