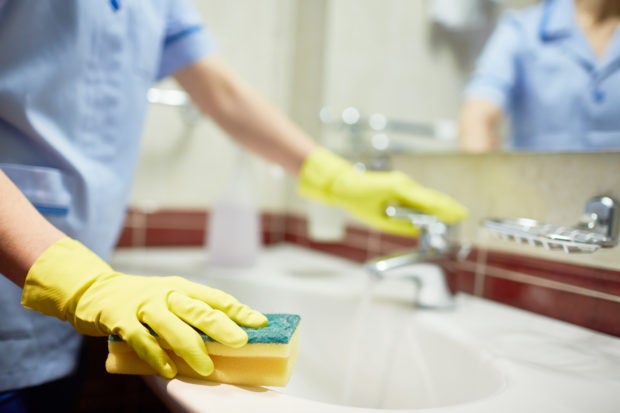 Exposure to hormone-disrupting chemicals during pregnancy, such as those found in cleaning products, could affect a child’s IQ. Image: IStock.com/Shironosov via AFP Relaxnews

New research has found that exposure to chemicals which are suspected to be endocrine-disruptors during the first trimester of pregnancy may affect children’s IQ level at age seven.

For the study, researchers at Icahn School of Medicine at Mount Sinai, United States, and Karlstad University, Sweden, together measured the levels of 26 chemicals in the blood and urine of 718 Swedish mothers during the first trimester of their pregnancies.

The researchers included bisphenol A (BPA), which is found in plastic food and drink containers, as well as pesticides, phthalates, and chemicals found in everyday products. Some of these chemicals are known to disrupt the endocrine system of humans, meaning they disrupt hormone activity, while others are known to affect animals. Some of the chemicals included are at the moment only suspected to be endocrine disruptors because they share chemical features with known disruptors.

The team then carried out a follow-up to look at the children of the mothers when they were seven years of age.

The findings, published in the journal Environment International, showed that the children whose mothers had higher levels of the chemicals in their system during pregnancy had lower IQ scores at age seven.

This effect also appeared to be stronger in boys than girls, whose scores were lower by two points.

When the team looked at the effect of specific chemicals, they found that bisphenol F (BPF), which is a BPA-replacement compound, had the biggest effect on the children’s IQ, suggesting that BPF is not actually any safer for children than BPA.

As many of the chemicals investigated in the study only stay in the body a short time, the researchers explain that even short-term exposure could have a negative effect on health, and so it is important for pregnant women, or those who are trying to become pregnant, to try to prevent exposure to these chemicals.

“This study is significant because most studies evaluate one chemical at a time; however, humans are exposed to many chemicals at the same time, and multiple exposures may be harmful even when each individual chemical is at a low level,” added study author Eva Tanner, Ph.D., MPH.

However, the researchers also noted that they cannot establish cause and effect from the findings of the current study and that further research is now needed. CL/JB