Samsung hints at upcoming gadget that folds in half vertically 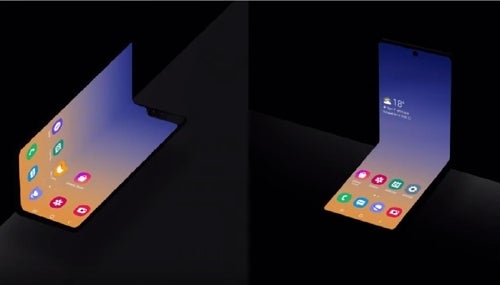 SEOUL — As handheld gadgets get bigger and their capabilities continue to evolve, the user interface will become the central determinant of quality for mobile devices, according to executives at Samsung Electronics on Tuesday.

At Samsung Developer Conference 2019, which kicked off its two-day run in San Jose, California, the South Korean tech titan highlighted the importance of the mobile user interface and unveiled the second edition of One UI, its latest UX brand, along with new software development tools as part of a new vision that emphasizes a seamless and secure ecosystem.

The annual forum in the heart of California’s Silicon Valley brings together thousands of tech developers and creators every October to share Samsung’s vision for the following year and explore new ideas through keynote speeches, technical sessions and networking time.

In addition to its current vision for connected living, Samsung will seek ways to improve the user experience further as people rely on mobile devices more and more.

“We continue to make progress toward our vision to be the innovator of new mobile experiences that flow seamlessly and continuously wherever we go,” said Koh Dong-jin, Samsung’s mobile business chief, during his keynote speech at the conference.

In a step closer to realizing that vision, Samsung said it has upgraded the latest mobile UX, One UI, which was launched last year along with the Galaxy Fold, and is beta testing the second edition.

One UI 2 includes new features that declutter the user interface, making it easier on the eyes and also helping people interact naturally.

“The core principle of One UI is to enable users (to) focus on what matters more by making the interface visually comfortable with less distraction,” said Hong Yoo-jin, vice president in charge of UX innovation at the company.

Compared with the first version, the mobile UX has been upgraded in pursuit of perfection with the aim of making the interface operate more smoothly with minimal finger motions.

One of the most noticeable changes is that pop-ups have been reduced significantly, meaning fewer distractions for users when they’re watching videos or performing other tasks.

Also, considering that mobile devices are mostly controlled with a single thumb, pop-up messages are placed at the bottom of the display within reach of the user’s thumb.

“Our goal is to minimize the movements of fingers as much as possible on screens,” said Hong.

The introduction of “dark mode” last year, ahead of similar moves by rivals such as Apple and Huawei, is the most successful example of Samsung’s UX innovation efforts, the executive said.

One UI is now available on Galaxy smartphones and will be expanded to tablets, wearables and new form factors including foldable devices.

During the conference, as a surprise, Samsung hinted at a new form factor for its next foldable gadget, a clamshell device that folds in half vertically.

The company uploaded a video about the new device on YouTube as well.

“This brand new form factor we are exploring will not only easily fit in your pocket, but will also change the way you use your phone — even when you take photos and videos,” said Chung Hye-soon, vice president of the UX team, during her presentation. “As a pioneer in the foldable category, we understand that every innovative form factor requires an equally innovative user experience.”

According to news reports, the clamshell foldable device can be expected to make its debut early next year. Samsung is reportedly collaborating with US fashion brand Thom Browne on the design. The second foldable is expected to be thinner and cheaper than the Galaxy Fold.

Designed to be accessible to users from all walks of life — people with disabilities were the top priority — One UI 2 boasts some special features.

For those with visual impairments, the color of the keyboard can be changed to black and the keys can be turned yellow for a color contrast ratio of 1 to 3.

“The yellow color has been fine-tuned to make it comfortable to the eyes of users with vision problems,” Hong said.

At the conference Samsung announced some new products and technologies, too.

With brightness reaching as much as 600 nits in outdoor mode, the laptops offer vivid and true-to-life viewing experiences.

AI ScaleNet, a technology that allows users to stream high-quality 8K videos on networks with lower bandwidth capabilities, was introduced as well.