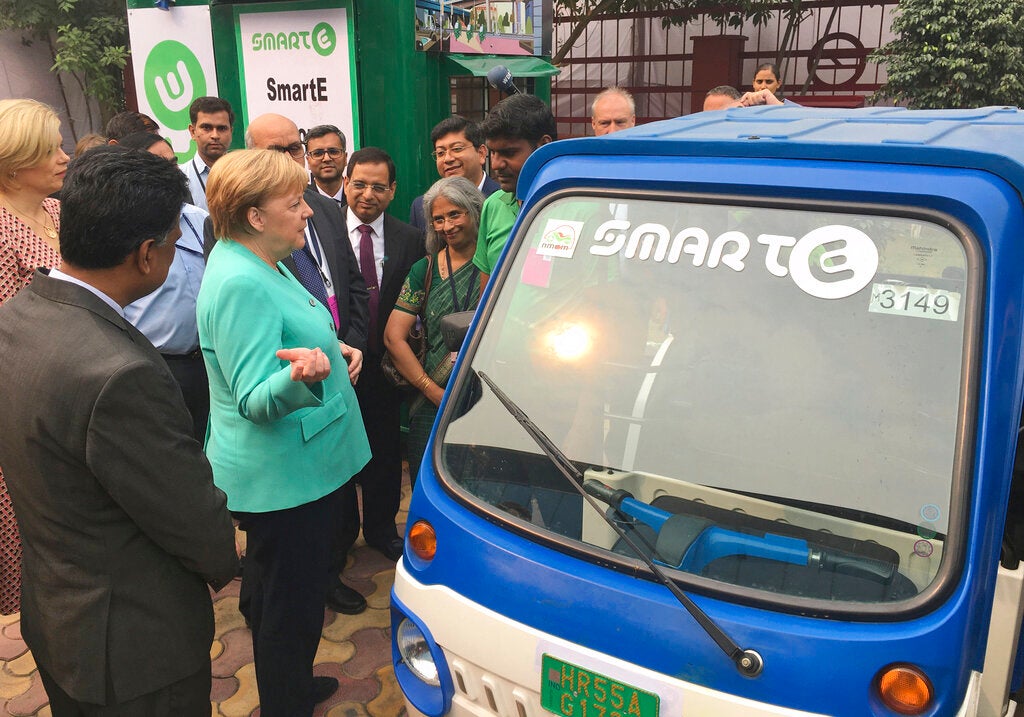 German Chancellor Angela Merkel speaks with a driver of an electric vehicle at a metro station in New Delhi, India, Saturday, Nov. 2, 2019.  (AP)

BERLIN  — German Chancellor Angela Merkel said Sunday she wants to drastically increase the number of charging stations for electric cars in Germany to give consumers more confidence to switch over to electric from internal combustion engines.

The comments come ahead of her meeting Monday with automobile industry executives as part of efforts to help Germany’s transport sector meet emissions targets.

In addition to talking about Germany’s charging infrastructure, Merkel says those at the meeting will discuss government and industry incentives for electric cars and how to protect auto industry jobs amid the transition to producing more environmentally friendly vehicles. She says the development of hydrogen-powered cars can also play a role.

Germany is home to several major automobile manufacturers, including Daimler, BMW and Volkswagen, which includes many subsidiaries such as Audi, Skoda and Porsche.

Volkswagen’s reputation was tarnished and its bottom-line hit by a widely publicized diesel emissions cheating scandal that violated rules to protect air quality. But the Wolfsburg-based company is now leading the push into electric vehicles in Europe, launching its ID.3 battery-powered compact car at prices it says will make zero-local emission vehicles a mass phenomenon.

Koko Pimentel: Protocols may have changed over time