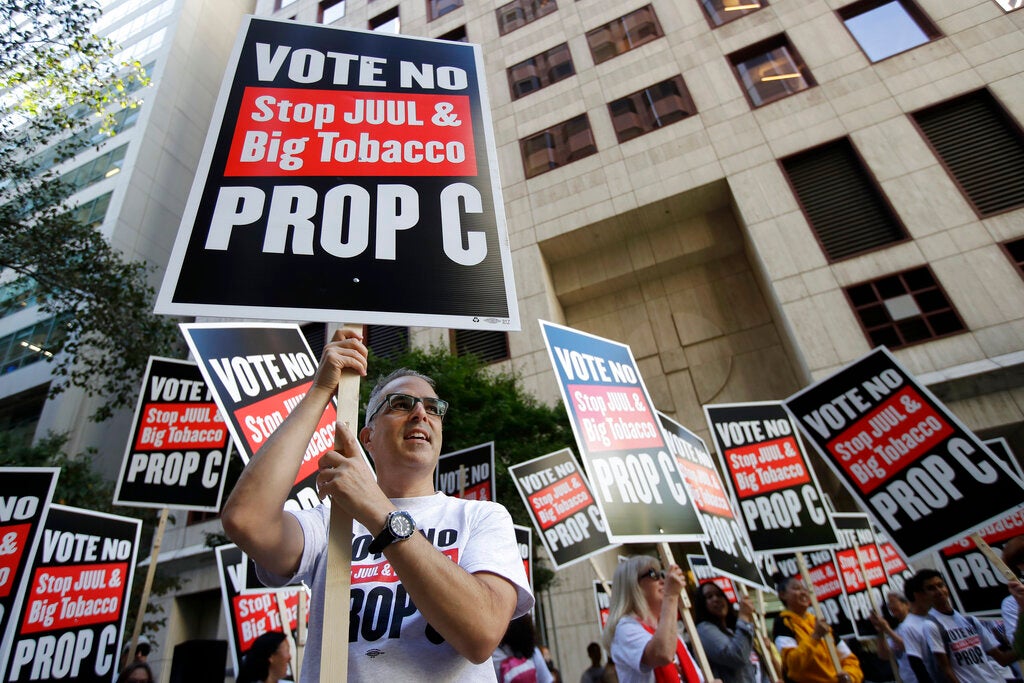 Protesters hold signs during a rally outside of a Juul Labs office in San Francisco.  (AP)

SAN FRANCISCO — Tuesday’s ballot for San Francisco voters includes a race for mayor and a proposition to overturn a city ban on e-cigarette sales.

Mayor London Breed faces five little-known candidates and is bound to win her first four-year term. She has been in office since winning a special June 2018 election following the sudden death of Mayor Ed Lee.

Voters are also taking up Proposition C, which was put on the ballot by e-cigarette maker Juul Labs. The measure would overturn a new city law to ban sales of e-cigarettes until they have been approved by the U.S. Food and Drug Administration.

San Francisco-based Juul dumped $12 million into the campaign before halting financial support for the proposal in September. Opponents of the measure say its passage would harm efforts to curb youth vaping.

Breed is the first African American woman elected mayor of San Francisco, a politically liberal city of nearly 890,000 grappling with high housing costs, an increase in homelessness and a drug crisis.

The former president of the Board of Supervisors was raised by her grandmother in the city’s public housing and has made equity a priority in a city that has become deeply inequitable. She wants to build housing and provide more shelter and services for people who are homeless, addicted to drugs or have a mental illness.

The mayor said in an interview with The Associated Press before the election that she is frustrated by people who want more housing but don’t want more units in their neighborhood.

ADVERTISEMENT
TOPICS: e-cigarette, elections, Health, San Francisco
Read Next
Hungary says Huawei to help build its 5G wireless network
EDITORS' PICK
DILG to stranded workers: ‘Stay where you are’ until Luzon-wide quarantine is over
UP-PGH wards for COVID-19 patients finished in 5 days
Style and music journeys with Claudia Barretto
IATF: Food firms to operate with 50% of workforce during Luzon quarantine
BREAKING: 1,075 people in PH has coronavirus disease – DOH
Cebu City closes its borders
MOST READ
Pacquiao to seek probe on leaked private letter from Barangay Dasmariñas
No more bread? Company forced to limit production
BREAKING: 1,075 people in PH has coronavirus disease – DOH
Another doctor dies due to COVID-19 in Cebu City, doctor-husband critical
Don't miss out on the latest news and information.