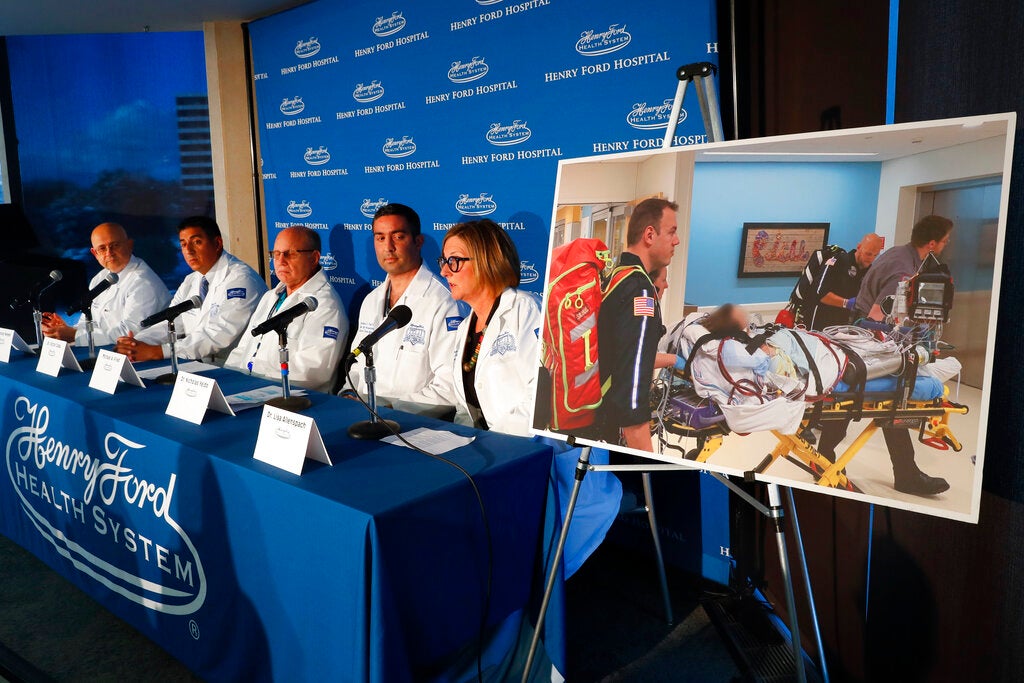 A photo of a patient being transported is displayed while medical staff at Henry Ford Hospital answer questions during a news conference in Detroit, Tuesday. (AP)

DETROIT — A Michigan teenager was the recipient of what could be the first double lung transplant on a person whose lungs were severely damaged from vaping, health officials said Tuesday.

Doctors at Henry Ford Hospital in Detroit described to reporters Tuesday the procedure that saved the 17-year-old’s life and pleaded for the public to understand the dangers of vaping.

The teen was admitted in early September to a Detroit-area hospital with what appeared to be pneumonia. He was transferred to Children’s Hospital of Michigan in Detroit and taken Oct. 3 to Henry Ford Hospital where the transplant was performed Oct. 15. The double lung transplant is believed to be first performed on a patient due to vaping.

Doctors found an “enormous amount of inflammation and scarring” on the teen’s lungs, said Dr. Hassan Nemeh, surgical director of thoracic organ transplant at Henry Ford. “This is an evil I haven’t faced before. The damage that these vapes do to people’s lungs is irreversible. Please think of that — and tell your children to think of that.”

FEATURED STORIES
TECHNOLOGY
LOOK: Japanese boy wows but confuses girls, boys
TECHNOLOGY
How To Identify AI Art In Four Ways
TECHNOLOGY
The Jobs Safe From AI, And Those That Aren’t

Health officials declined to release the teen’s name and said he is expected to recover. They also did not specify what the teen vaped or how long he vaped.

“We asked Henry Ford doctors to share that the horrific life-threatening effects of vaping are very real!” his family said in a statement released by the hospital. “Our family could never have imagined being at the center of the largest adolescent public health crisis to face our country in decades.

“Within a very short period of time, our lives have been forever changed. He has gone from the typical life of a perfectly healthy 16-year old athlete – attending high school, hanging out with friends, sailing and playing video games – to waking up intubated and with two new lungs, facing a long and painful recovery process as he struggles to regain his strength and mobility, which has been severely impacted.”

The boy had his 17th birthday after initially being admitted to the hospital.

More than 2,000 Americans who vape have gotten sick since March, many of them teenagers and young adults, and at least 40 people have died.

The Centers for Disease Control and Prevention last week announced a breakthrough into the cause of a vaping illness outbreak, identifying the chemical compound vitamin E acetate as a “very strong culprit” after finding it in fluid taken from the lungs of 29 patients. Vitamin E acetate previously was found in liquid from electronic cigarettes and other vaping devices used by many who got sick and only recently has been used as a vaping fluid thickener.

Many who got sick said they had vaped liquids that contain THC, the high-inducing part of marijuana, with many saying they received them from friends or bought them on the black market.

E-cigarettes and other vaping devices heat a liquid into an inhalable vapor. Most products contained nicotine, but THC vaping has been growing more common.

“Vaping-related injuries are all too common these days. Our adolescents are faced with a crisis,” said Dr. Lisa Allenspach, pulmonologist and the medical director of Henry Ford’s Lung Transplant Program. “We are just beginning to see the enormous health consequence jeopardizing the youth in our country … these vaping products should not be used in any fashion.”

The 17-year-old’s case does not open any new ethical considerations about transplants for people how who irreparably damage their own lungs by vaping, Nemeh told The Associated Press.

“It won’t change what we do on a routine basis. We will still evaluate every patient as an individual patient,” he said. “We hope sharing this patient’s story prevents anyone else from experiencing a vaping injury that would require a transplant.”

Nemeh added that lung transplants have been considered for ex-smokers who have quit and demonstrated that they quit smoking, but transplants are not routinely done for people over the age of 70.

“Children do receive priority over an adult for a transplant from a pediatric donor,” he said. “The United Network for Organ Sharing creates the rules and then offers the organs to recipients who are a match. We don’t decide who gets an offer.”