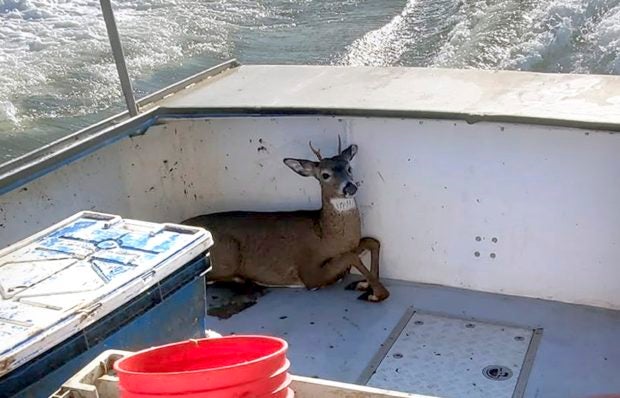 A deer that was rescued from the ocean five miles offshore from Harrington, Maine, rests in a boat on its way back to shore. Lobsterman Ren Dorr and his crew saw the 100-pound buck bobbing in the water, hauled it aboard and returned to shore where the deer was released in Harrington. Image: Jared Thaxter via AP

HARRINGTON, Maine  — A Maine lobsterman hauled in an unusual catch 5 miles off the coast — a live deer.

Ren Dorr said he was setting traps when he saw a young deer in the morning of Nov. 4. He said the deer had given up swimming and was being carried farther offshore.

He and his crew hauled the 100-pound buck aboard.

Having a wild animal in a confined space could be trouble. But Dorr told the Bangor Daily News that the deer was so tuckered out that he “laid right down like a dog.” 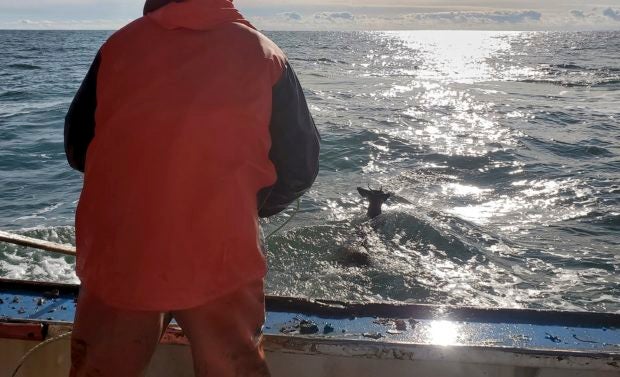 He said it took a half-hour to return to Harrington, where the deer was set free.

Dorr said that he has seen deer swimming before but that this was different.

He said that if he and his crew had not intervened, the deer would have been “a goner.” IB/JB

LOOK: Turtles with swastikas painted on their shells found in park