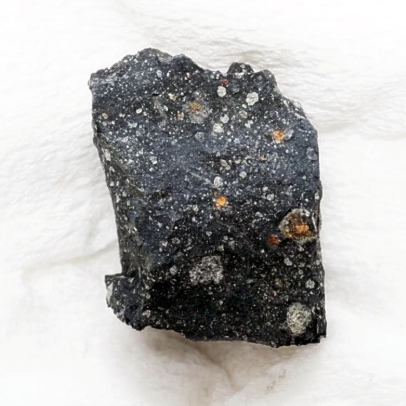 A part of the Murchison meteorite measuring about 2 centimeters in length. Photo courtesy of Yoshihiro Furukawa via The Japan News/Asia News Network

TOKYO — A kind of sugar essential to life has been found in meteorites for the first time in history, according to researchers from Tohoku University and other institutions.

The sugar is called ribose, which makes up the backbone of RNA (ribonucleic acid) that encodes the genetic information of organisms. Sugars have been found in meteorites before, but this is the first such discovery of the sugar indispensable for life to emerge, according to the researchers.

They claim the new findings support a theory that the essential components for the origin of life arrived on Earth from outer space. Their article was published in the U.S. journal Proceedings of the National Academy of Sciences.

A team including Yoshihiro Furukawa, an associate professor at Tohoku University, and researchers from the National Aeronautics and Space Administration and other organizations analyzed three kinds of meteorites, including the Murchison meteorite that fell in Australia in 1969.

Their analysis found ribose in the Murchison meteorite and in a meteorite found in Morocco in 2001. The researchers analyzed characteristics of carbon atoms contained in the ribose, and found that the molecules did not originate on Earth.

They are believed to have formed when the solar system was still new, more than 4 billion years ago, and come to Earth along with the meteorites.

There are two theories about the origin of materials that are the building blocks of life: that they came from outer space, or they were formed on Earth. Past analysis of meteorites has found phosphorus compounds, the base material of RNA, and other substances, but not sugars.

Akihiko Yamagishi of the Tokyo University of Pharmacy and Life Sciences, who is familiar with extraterrestrial organisms, said: “The findings are an important achievement to fill in missing parts. They proved that a component of RNA exists in outer space.”

A chainlike molecule that plays a role in carrying genetic information and controlling the synthesis of proteins. It has a structure in which the ribose sugar is bonded with other organic compounds and phosphorus compounds.