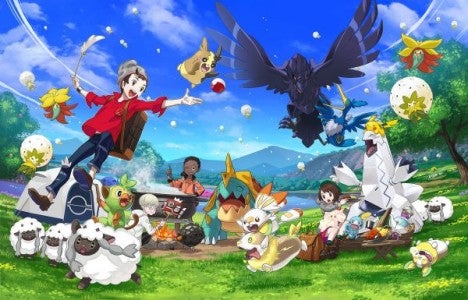 Initial reports suggest that the latest pair of “Pokémon” titles could have become the Nintendo Switch’s fastest-selling worldwide, according to data from Japan and the United Kingdom. Though “Pokémon Sword and Shield” did not outdo 3DS console predecessor “Pokémon Sun and Moon” in those territories, undisclosed digital downloads could yet make up the difference.

“Pokémon Sword and Shield” have become the third fastest-selling Nintendo game in the U.K, after the 3DS’s “Pokémon Sun and Moon” and the Nintendo Wii’s “Wii Fit.”

The prior Japanese record holder on Switch was “Super Smash Bros. Ultimate”, which had accrued 1.23 million sales over the same time period.

Japanese figures were published by Famitsu, which has access to national video game retail data.

In the U.K., “Pokémon Sword and Shield” were linked to a 75% increase in Nintendo Switch console sales the week before the games’ release and a 30% rise during the week of its debut, according to a GamesIndustry.biz source.

Demand for the current, standard Switch console was understood to drive that U.K. increase, rather than a special Pokémon-branded edition of the newer, smaller, less expensive Switch Lite.

The Switch Lite offers better battery life than even the revised original model currently at retail, but cannot use a TV or monitor as its main display, nor can its Joy-Con controllers be detached.

This prevents it from being used with some games such as fitness minigame compilation “Ring Fit Adventure”.

However, “Pokémon Sword and Shield” did not outsell franchise predecessor “Pokémon Sun and Moon” in the U.K. nor in Japan. The older games’ Japanese launch accounted for 1.9 million sales.

For context, when “Pokémon Sun and Moon” launched in November 2016 for the portable Nintendo 3DS, 61 million 3DS consoles had been shipped to retail worldwide, according to Nintendo’s own figures.

By the time of the “Sword and Shield” launch, Nintendo had shipped 41 million Switch units internationally.

Additionally, quoted figures relate to physical retail sales, but do not include digital sales, which have been trending upwards in the intervening years.

As a result, it is not yet clear whether “Sword and Shield” fell short of “Sun and Moon” overall, despite some sections of the fanbase expressing disappointment with game features and reception at review not quite attaining the same level of acclaim.

The “Pokémon Sword” and “Pokémon Shield” games are fundamentally identical save for a small number of exclusive characters, hence the combined sales figures.

Pokémon creatures exclusive to either “Sword” or “Shield” can be shared among players of both games, though that does not prevent some fans from buying a copy of each. IB/JB