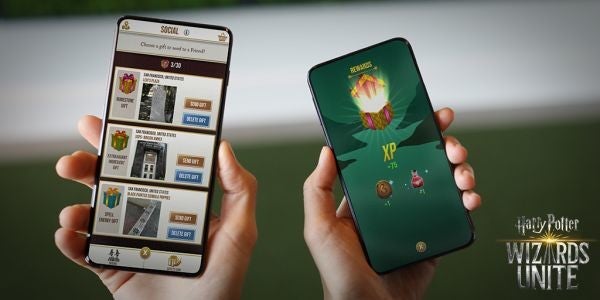 An update to mobile game “Harry Potter: Wizards Unite” lets users find random gifts at key locations and send them to their friends.

The inns, greenhouses, and fortresses of the augmented reality game are now adding gift boxes to their contents.

Handily, the gifts are made available at no cost to players — or, at least, not overtly, given that “Wizards Unite” generates revenue from optional microtransactions linked to gameplay progression.

Players can collect the gifts when they complete activities at the game’s three types of simulated locations, using the app’s friend list or Ministry ID page to send them to their pals.

Blue gift boxes can be recovered from inns, giving the recipient an amount of Spell Energy; green gifts come from greenhouse locations, and contain Runestones; yellow gifts come from fortresses and are packages for Potions.

The scheme also encourages players to visit Sponsored Locations, because those will contain greater base rewards, the official blog for “Harry Potter: Wizards Unite” explains.

There’s a 24-hour cooldown on sending gifts to each individual friend, while hoarders can store up to 100 gifts in their inventories, opening up to 10 each day.

Both sender and receiver will be able to see where the gift was first obtained.

Gifting, as well as trading, was added to “Pokémon Go” in June 2018, two years after the game’s release.

Both geolocation games are developed by mobile AR specialist Niantic after initial success with original, unlicensed property “Ingress”; all three use Google Maps data, the studio having begun life as part of the search and data giant. IB/JB