Quitting smoking could cause changes in gut bacteria — study 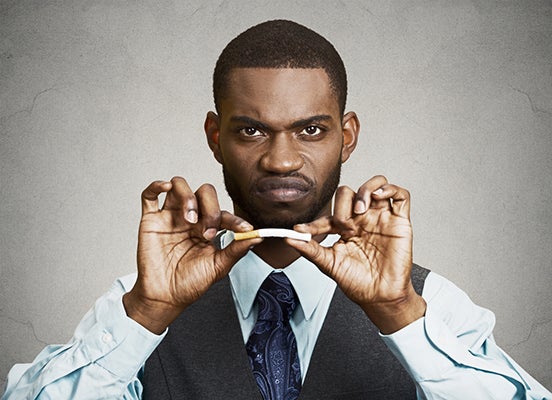 Quitting smoking could have a beneficial effect on the gut microbiome, according to new research. Image: Istock.com/SIphotography via AFP Relaxnews

A new small-scale pilot study has found that quitting smoking appears to lead to major changes in the gut microbiota, which is the community of bacteria, viruses and fungi which live mainly in our small and large intestines.

Carried out by researchers at the University of Wisconsin-Madison in the United States, the new study looked at 26 smokers who were trying to kick the habit and analyzed their stool samples at the start of the study and then again two weeks and 12 weeks later.

The findings, which will be presented this week during the American Heart Association’s Scientific Sessions in Philadelphia, showed that quitting smoking led to improvements in the diversity of bacteria, which were associated with reductions in heart rate, systolic blood pressure and C-reactive protein levels (which increase when responding to inflammation) and an increase in hemoglobin (which are the red blood cells that carry oxygen).

“All of those changes are indirect markers of potentially better health,” explains the study’s lead author, Dr. Marcus Sublette. “It adds greater fuel to the hypothesis that the gut microbiome is really doing something for cardiovascular disease.”

Past research has also shown that smoking is linked with a decrease in the diversity of beneficial bacteria living in the gut.

“It’s hard to know exactly yet what that ratio means, because we are very early on in the study of the gut microbiome and cardiovascular disease. But it adds to the overall picture and helps us start to understand this,” said Sublette.

The researchers recognize that the study was limited by its small patient size and a rather specific focus, however, Sublette commented that, “We concluded that smoking cessation changes the gut microbiota, and I think that’s a significant piece of science.” He is now planning to carry out further research.

Dr. Stanley Hazen, director of the Center for Microbiome & Human Health at the Cleveland Clinic, who was not involved in the research, said the study results “hint at the need to take a global view of one’s metabolism, including the gut microbial community within.”

Hazen added that “a change in our environmental exposure impacts the host in many different ways, including shifts in the gut microbial community. What changes occur as a result of smoking cessation is an interesting question that remains to be determined.” RGA

WATCH: Smoker sprayed on with fire extinguisher for refusing to put out cigarette