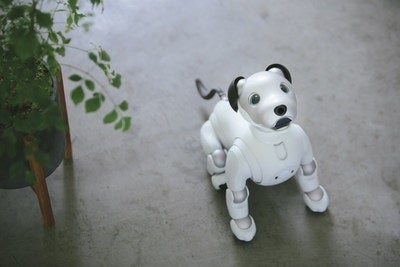 AIBO owners can now program the robot dog to do new tricks. Image: Courtesy of Sony via AFP Relaxnews

For years, Sony has been developing robot dogs that have the capacity to emulate the behavior of real pups. Last year, the sixth generation of AIBO went on sale in the United States complete not only with pooch mannerisms, but also with artificial intelligence (AI) and cloud-connected technology.

Since this launch, AIBO has become as much of a house watchdog as a companion thanks to software updates that take advantage of the device’s cameras and sensors to send owners live reports of their house while they are away. Most recently, the robot dog received an update that allows developers to program AIBO to perform specific actions like eating a virtual cookie.

Version 2.50 of the ERS1000 model comes with a web-based application programming interface (API) that gives owners access to the “AIBO Developer Program” and “AIBO Visual Programming” tools. While developers ranging from beginner to advanced can program AIBO to make original movements and tricks, “they cannot change the emotion, character or mood of AIBO through programming.”

Sony hopes that such tools can be cooperative in the future so that they can be shared between users. RGA