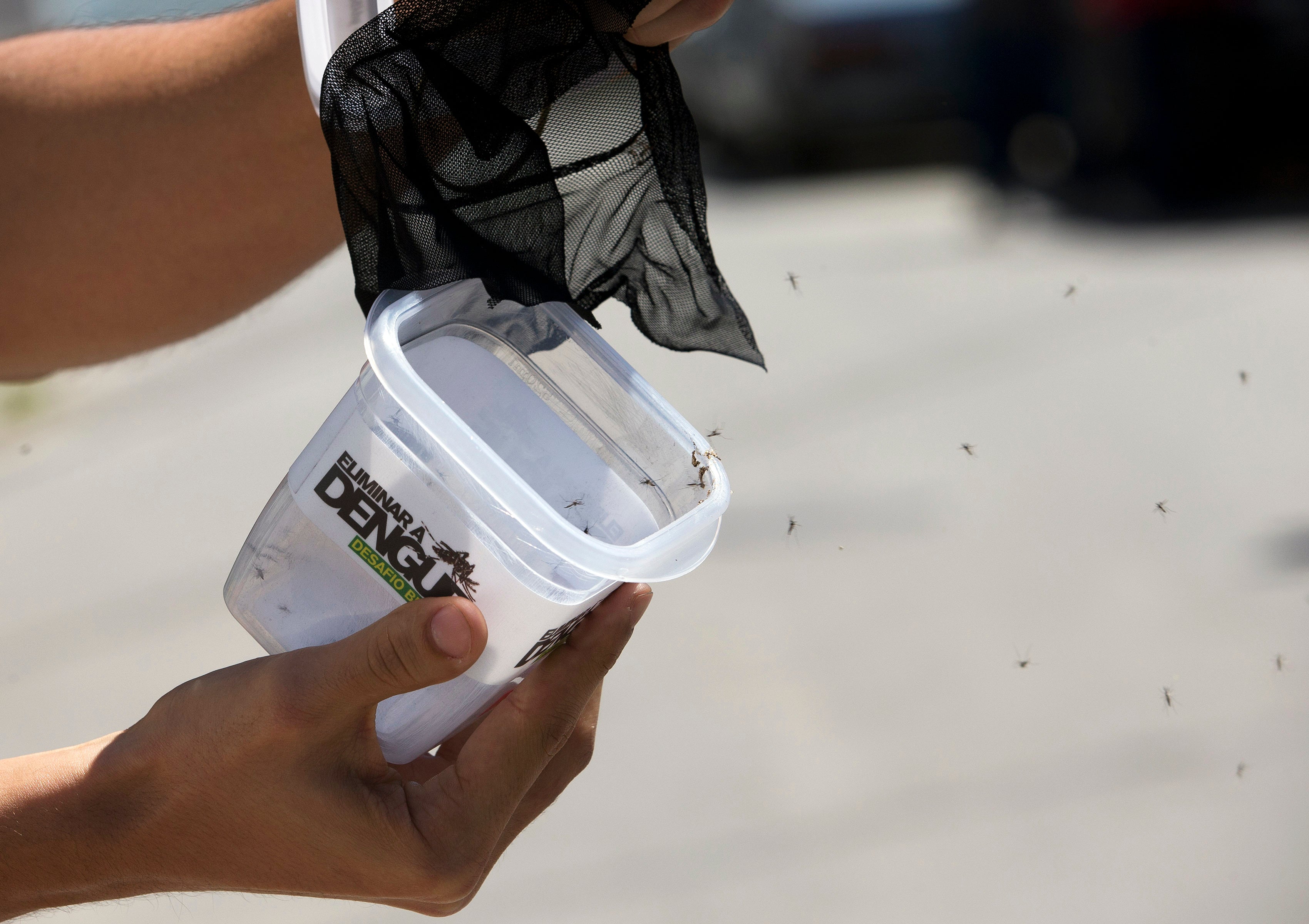 FILE – In this Wednesday, Sept. 24, 2014, file photo, a technician releases mosquitoes that are infected with a dengue-blocking bacteria called “Wolbachia” in the Tubiacanga neighborhood of Rio de Janeiro, Brazil. The nonprofit World Mosquito Program infected mosquitoes with that bacteria, called Wolbachia, and released them in communities in Indonesia, Vietnam, Brazil and Australia that agreed to be test sites. Researchers say dengue cases fell dramatically, compared to nearby communities where regular mosquitoes did the biting. (AP Photo/Silvia Izquierdo, File)

WASHINGTON  — They still bite, but new research shows lab-grown mosquitoes are fighting dangerous dengue fever that they normally would spread.

Dengue infections appear to be dropping fast in communities in Indonesia, Vietnam, Brazil and Australia that are buzzing with the specially bred mosquitoes, an international research team reported Thursday.

It’s the first evidence from large-scale field trials that mosquitoes are less likely to spread dengue and similar viruses when they also carry a type of bacteria that’s common in insects and harmless to people.

Rather than using pesticides to wipe out bugs, “this is really about transforming the mosquito,” said Cameron Simmons of the nonprofit World Mosquito Program that is conducting the research.

The first hint of success came from Australia. Mosquitoes bred to carry Wolbachia bacteria were released in parts of North Queensland starting in 2011, and gradually spread through the local mosquito population. Dengue is transmitted when a mosquito bites someone who is infected, and then bites another person, but somehow Wolbachia blocks that — and local transmission has nearly disappeared in those North Queensland communities, Simmons said in an interview.

The real test would come in dengue-plagued areas in Asia and Latin America that regularly experience outbreaks where millions get the painful and sometimes deadly disease.

Thursday, Simmons’ team reported a 76% decline in dengue recorded by local authorities in an Indonesian community near the city of Yogyakarta since the 2016 release of Wolbachia-carrying mosquitoes. That’s compared to dengue transmission in a nearby area where regular mosquitoes do the biting.

Researchers found a similar drop in a community near the southern Vietnamese city of Nha Trang. And preliminary results suggest large declines in dengue and a related virus, chikungunya, in a few neighborhoods in Brazil near Rio de Janeiro.

The studies are continuing in those countries and others. But the findings, presented at a meeting of the American Society for Tropical Medicine and Hygiene, suggest it’s possible to turn at least some mosquitoes from a public health threat into nuisance biters.

The work marks “exciting progress,” said Michigan State University professor Zhiyong Xi, who wasn’t involved with the project but has long studied how Wolbachia can turn mosquitoes against themselves.

Reducing disease “is the ultimate success of our field,” added University of Maryland biologist Brian Lovett, who also wasn’t part of the project.

“The results are pretty exciting — strong levels of reductions — but there clearly are going to be things to be learned from the areas where the reductions are not as great,” McGraw said.

More than half of insect species, from fruit flies to butterflies, naturally are infected with Wolbachia — but not the main dengue-spreader, Aedes aegypti mosquitoes. They’re daytime biters that thrive in hot urban and suburban localities where, for now, widespread pesticide spraying is the main protection.

Researchers with the World Mosquito Program first injected mosquito eggs with Wolbachia in a lab. Infected females then pass the bacteria on through their eggs. Releasing enough Wolbachia carriers, both the females that bite and the males that don’t, allow mating to spread the bacteria through a local mosquito population.

The approach doesn’t reduce bites. Simmons said the up-front cost is cheaper than years of spraying and medical care.

It’s just one of multiple novel mosquito-control methods under study:

—Michigan State’s Xi uses Wolbachia in a different way — to eliminate mosquitoes. Release only male Wolbachia carriers and when they mate with uninfected females, the eggs don’t hatch.

—Other researchers zap male mosquitoes with a small dose of radiation, sterilizing them before releasing them into the wild.

—Genetically modifying mosquitoes is another approach. Furthest in development is Britain’s Oxitec, which gives male mosquitoes a gene to weaken their offspring so they don’t survive to adulthood.

Each approach has pros and cons, but “our best hope to control the mosquitoes that make us sick is to box them in with multiple technologies,” said Maryland’s Lovett.