You can now mix and match your Bitmoji’s clothing 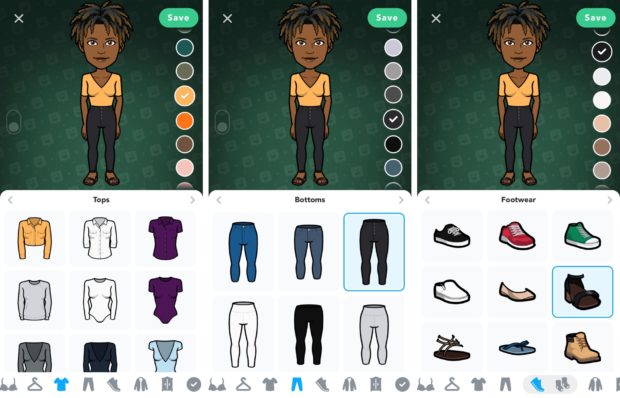 Snapchat is rolling out a new feature to Bitmoji that lets users customize each part of their avatar’s outfit. Image: courtesy of Snap Inc. via AFP Relaxnews

Snap Inc. has launched a new Bitmoji feature that lets users make their avatars resemble themselves — particularly in terms of their clothing tastes — even more closely; it’s called Mix and Match.

On Monday Snap Inc. began rolling out a new feature for Bitmoji: The Mix and Match clothing option.

This new tool allows users to become their digital avatar’s personal designer. The color of each virtual item of clothing can be customized and then paired with whichever tops, bottoms, coats, shoes, and other accessories a user likes. Outfits can then be saved in an individual’s Bitmoji closet so that they can wear it again later.

With the launch of this tool, Bitmoji is also offering users real-life 20% off Bitmoji merch (which is only accessible to iOS users) so that they can put their newly styled avatar on a T-shirt or mug.

This update is coming just in time to make the Snap Inc. app fiercer competition against Facebook’s own Avatars which are due to launch in what’s left of this year or in early 2020. They have been available exclusively in Australia since this past June.