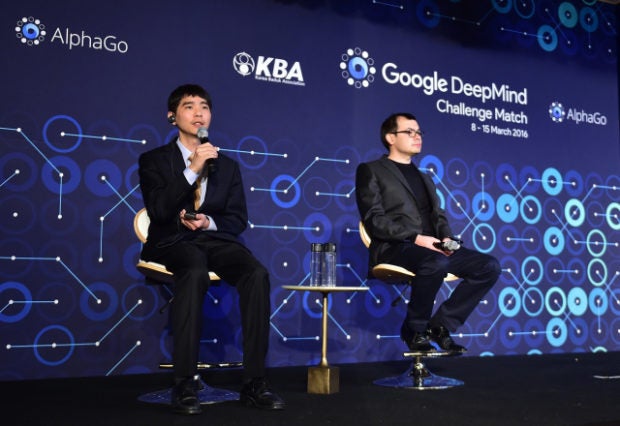 Lee Se-Dol (L), one of the greatest modern players of the ancient board game Go, with Google Deepmind head Demis Hassabis (R) at the Google DeepMind Challenge Match in March 2016. Image: AFP/Jung Yeon-Je

The only human ever to beat Google’s computer algorithm at the ancient Chinese strategy game Go decided to retire because he is convinced machines “cannot be defeated,” a report said Wednesday.

The 18-time world Go champion lost all but one encounter in the series, but remains the only person to have won a game against AlphaGo.

The machines have since developed much further — an updated self-teaching version of the algorithm beat its predecessor 100 games to none.

“Even if I become the number one, there is an entity that cannot be defeated,” Lee, 36, told South Korea’s Yonhap news agency.

“With the debut of AI in Go games, I’ve realized that I’m not at the top even if I become the number one,” added Lee, who retired from professional Go competition last week.

Go originated in China 3,000 years ago and has been played for centuries — mostly in China, Japan and South Korea.

The rules are simple: two players take turns placing black or white stones on a square board with a 19×19 grid. Whoever captures the most territory wins. But the strategies needed to secure victory are complex, and there are said to be more possible move configurations than atoms in the universe.

Considered one of the greatest Go players of the modern era, Lee started playing at the age of five and turned professional just seven years later. But he attributed his AlphaGo win to a “bug” in the program’s response to his “tricky” play.

“My white 78 was not a move that should be countered straightforwardly,” he said. RGA