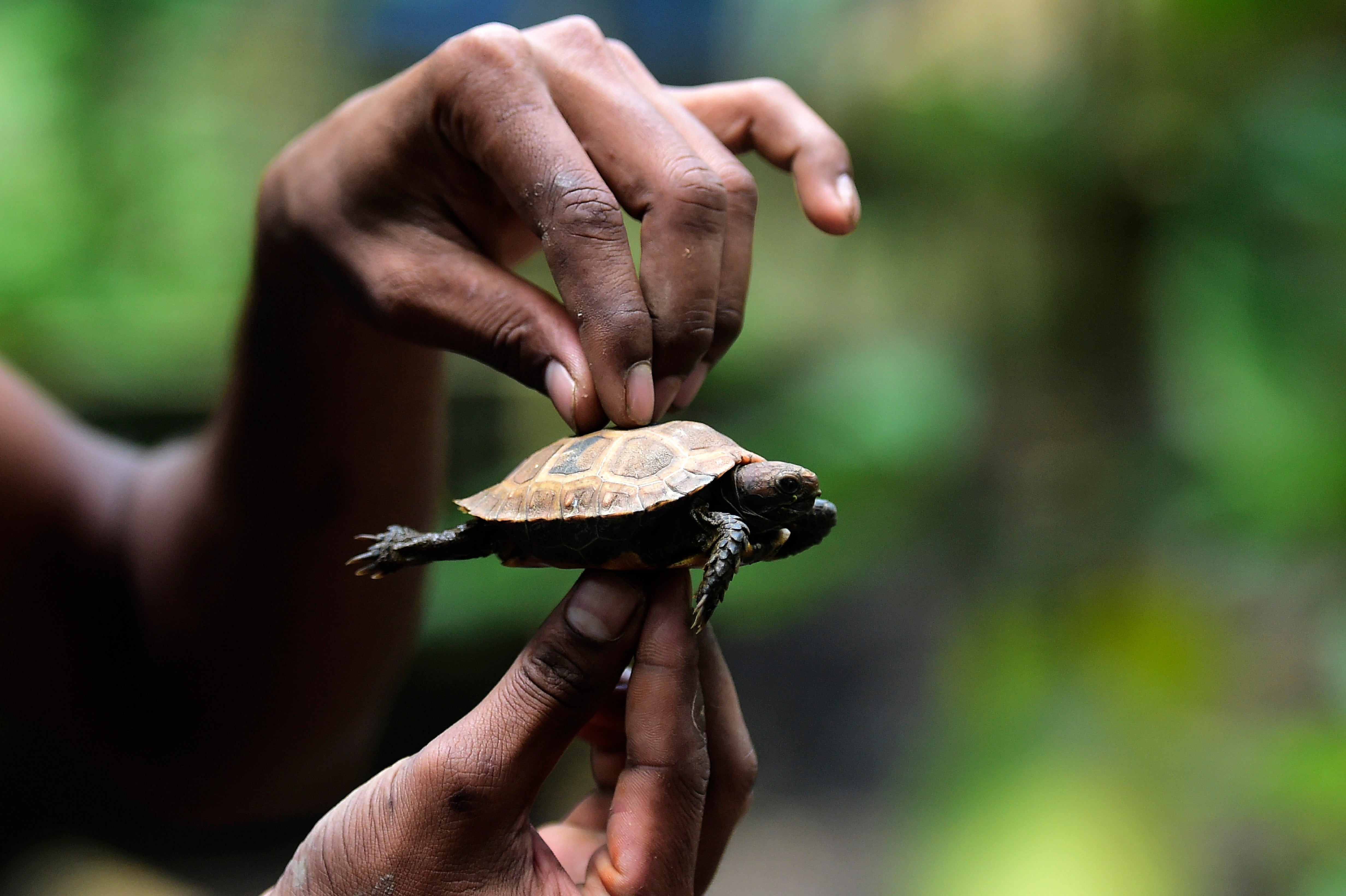 In this picture taken on October 12, 2019, a worker holds a baby of an Asian giant tortoise at the Turtle Conservation Centre at a forest reserve in Rajendrapur, some 40 kilometers (25 miles) north of capital Dhaka. – The newly hatched tortoises take their first steps in a small box, their feet barely visible under bony shells. These little giants — among 41 babies born to several Asian Forest Tortoises brought together at a conservation park in Bangladesh — carry the weight of their species on their backs. (Photo by MUNIR UZ ZAMAN / AFP)

RAJENDRAPUR, Bangladesh — Newly-hatched tortoises take their first steps at a Bangladesh conservation park, their feet barely visible under hard shells that carry the weight of the species on their backs.

These tiny newborns — 41 in all — belong to a species thought to have gone extinct in the country until seven years ago when they were rediscovered by conservationists with the help of locals in the southeastern Chittagong hills.

Once abundant across dense tropical forests in Bangladesh, Myanmar, and Thailand, the population of Asian Forest Tortoises has fallen sharply after widespread habitat destruction and rampant poaching.

With their local population estimated at less than 50 before the recent births, wildlife experts and forestry officials have worked hard to boost their numbers.

Two years ago they brought two male and five female adults to a forest reserve north of the capital Dhaka in an effort to breed them in captivity.

To their delight, the appropriately-named Casanova, around 15 years old, and Big Boy, aged between 50 and 100, mated with four females giving birth to 46 babies.

The 41 to have survived are growing at a “healthy pace”, conservationist Shahriar Caesar Rahman told AFP.

“It is a huge achievement because without this intervention they would have gone extinct from the country,” Rahman said.

“We are giving them a realistic chance now for them to get back from the brink. And we hope that in future they will survive and thrive in Bangladesh.”

Across the region, the population of Asian Forest Tortoises has plummeted by at least 80 percent in the past 135 years and the species is critically endangered, according to the International Union for Conservation of Nature.

Environmentalists say the success of the breeding program is no guarantee the species will survive once the newborns are released back into the wild.

Logging and slash-and-burn agriculture are eating into their natural habitat, Rahman says.

The human population in the lush Chittagong hills has soared, with the area’s tribal minority groups pushed further into the jungle by the encroachment of settlers from elsewhere in Bangladesh.

Hills have been stripped bare of vegetation for new roads and development, and the tortoises are also popular in tribal cuisine.

Some tribespeople are also being trained to rescue the animals from poachers, with around two to three saved each year.

Meanwhile, a decades-long local insurgency has hampered efforts by authorities to protect the wild creatures and other endangered animals in the forest.

Senior forest department official Imran Ahmed told AFP the government will roll out new projects to conserve the fauna in the hilly area.

“Our plan is now to involve the local tribal people to conserve these rare animals. We want to co-manage the project with them. I think that’ll bring sustainable success,” Ahmed told AFP.