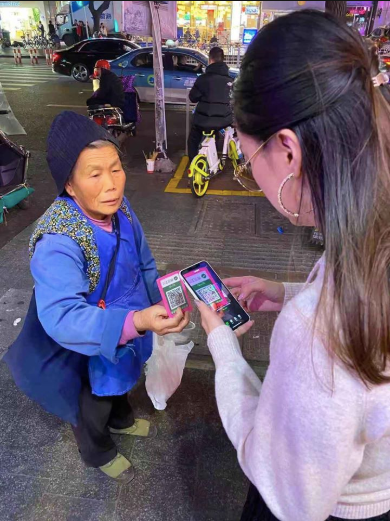 Instead of receiving just the typical spare change, a beggar in China has been accepting alms through a quick response (QR) code, connected to a Chinese multi-messaging app.

Cheah Chyuan Yong, a Chinese businessman, was apparently out having dinner with some friends in Beijing when a beggar approached them and asked for some spare change. Yong took a photo of the occurrence.

“In my previous post, I spoke about how almost everything is transacted through WeChat in China,” Irwan said.

A lady friend of theirs told the beggar that she did not have any cash to give, but “(the) beggar said it’s ok, you can pay through WeChat.”

The beggar presented her QR code and the woman then gave her money via WeChat Pay.

In my previous post, I spoke about how almost everything is transacted through WeChat in China. It so happened that…

WeChat Pay is a feature in the messaging app where users can send and receive money through their smartphones. According to the app’s website, the QR codes could be scanned through the users’ phone camera.

The trend for cashless forms of money transfer has been going strong in China.

New systems which require only face recognition are also being tested and could make even QR codes seem outdated soon. JB