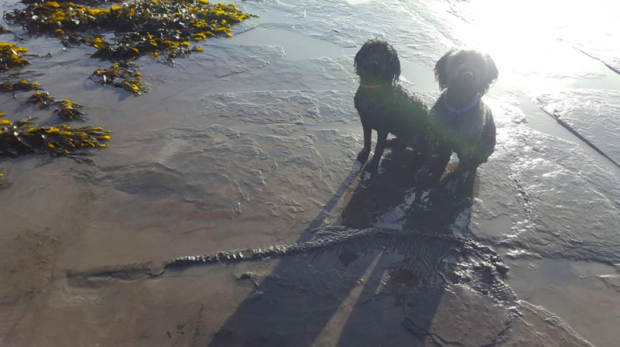 Jon Gopsill was walking his pets Poppy and Sam on the beach when they stumbled upon a Jurassic reptile’s fossil. Image: Facebook/Jon Gopsill

An amateur archeologist discovered what he believes to be a 65-million-year-old Jurassic reptile’s fossil along the beach, all thanks to his two dogs that led him to the find. The dog owner immediately reported his findings to the local heritage center as well as the Natural History Museum in the United Kingdom.

Jon Gopsill was walking his pets Poppy and Sam along the coast of Stolford, Somerset when they stumbled upon a fossil from the Jurassic period, the porpoise-like sea creature known as the ichthyosaurus, Daily Mail reported yesterday, Dec. 16. The 5-foot, 6-inch long skeleton was believed to have resurfaced after a recent storm.

Dr. Mike Day, a curator at the Natural History Museum confirmed Gopsill’s claim that the skeleton was most likely to be an ichthyosaur.

“Looking at this specimen, based on the number of bones in the pectoral paddle, the apparent absence of a pelvic girdle, as well as the distinctive ‘hunch’ of the back, this is likely to be the remains of an ichthyosaur,” Day was as quoted saying.

However, Day stated that it was not possible to identify the ichthyosaur fossil’s exact type based on the images taken by Gopsill alone.

“I often go to the beach walking with my dogs and when the tide goes out we go out to the rocks because they like playing there,” Gopsill stated in the report. “I was just blown away to see it there. It really is incredible that it has survived for such a long time and is now just there for everyone to see.”

West Somerset’s northern bays are known as a hotspot for fossil finds, according to the local newspaper.

Ichthyosaurs are a large group of marine reptiles abundant during the Jurassic geologic period, around 145 to 66 million years ago. As per report, the creatures’ average length was around 6 to 13 feet, and had similar features to present-day dolphins. Cha Lino/JB