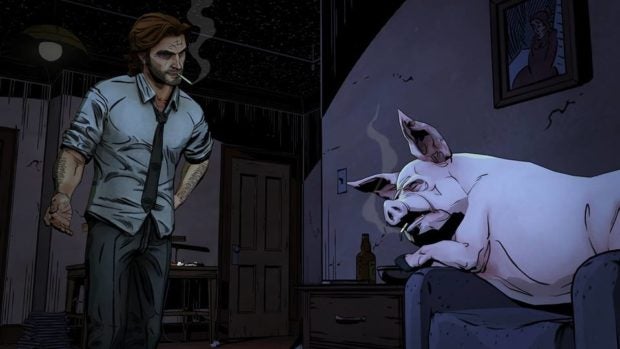 Bigsby Wolf (left) is returning to lead the cast of a sequel to “The Wolf among Us.”  Image: courtesy of Telltale Games via AFP Relaxnews

Having had “The Wolf among Us 2” announced on Dec. 13, the PC version of its predecessor is free from the Epic Game Store, with the 12 Days of Free Games campaign starting Dec. 19.

Based on the award-winning graphic novel “Fables,” a second season of the detective noir based on European fairy tales was in development when its studio suddenly shut down.

The October 2018 closure of Telltale Games meant that choice and consequence adventures “The Wolf among Us” and “Game of Thrones: A Telltale Games Series” had their second seasons lost to the void, while a “Stranger Things” game was presumed canceled.

However, the company has managed to start up again under new ownership, bringing out “The Wolf among Us 2” as its first title.

It’s been announced for unspecified consoles, and for PC through an exclusivity arrangement with Epic Games, best known for “Fortnite.”

In celebration of the announcement, Epic is giving away the first, episodic “The Wolf among Us” game as a freebie—a late addition to its schedule of fortnightly and then weekly giveaways through the Epic Games Store.

The program began on Dec. 14, 2018, and Epic took the opportunity to explain that as part of some “very exciting holiday plans,” it had organized “12 Days of Free Games” starting Dec. 19.

Not coincidentally, the date coincides with the anticipated annual Steam Winter Sale, Steam being one of the PC gaming sector’s dominant storefronts and one that Epic has made no bones about challenging head-on through its own store, underwritten by the revenue brought in by “Fortnite”. IB /ra