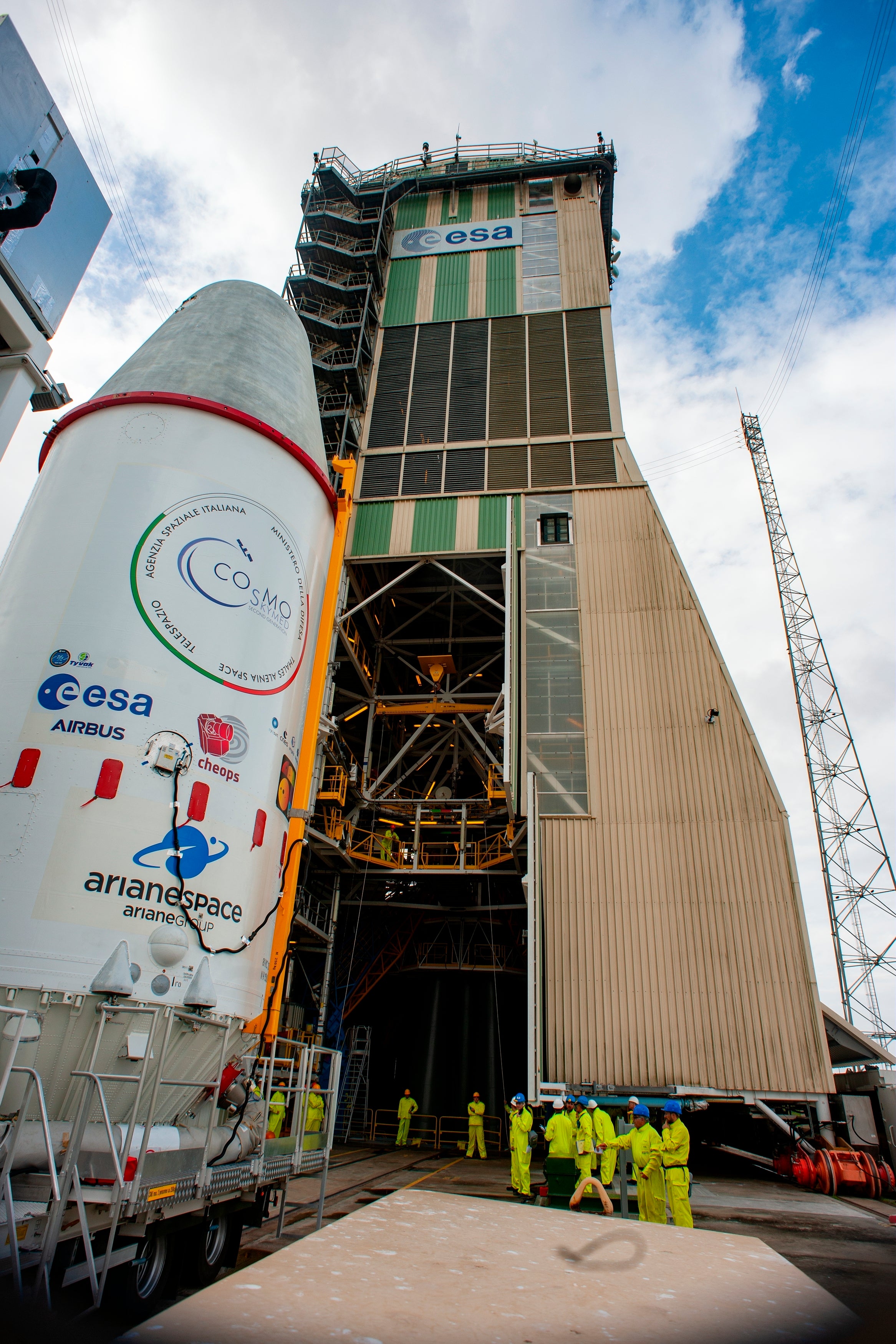 In this photo released on Saturday, Dec. 14, 2019 by the European Space Agency (ESA), the upper composite of the Soyuz that will lift ESA’s Cheops mission into space, along with the primary passenger, the Italian space agency’s Cosmo-SkyMed Second Generation satellite, and three CubeSats – including ESA’s OPS-SAT – is rolled into the mobile launch service tower at Europe’s Spaceport in Kourou, French Guiana. European space officials on Tuesday, Dec. 17, 2019 postponed the launch of a three-year mission to study planets in other solar systems shortly before it was due to blast off. (M. Pedoussaut/ESA via AP)

SAN JUAN, Puerto Rico — A European spacecraft launched from South America Wednesday on a three-year mission to study planets in other solar systems.

The Characterising ExOPlanets Satellite (CHEOPS) mission blasted off from Kourou, French Guiana at 0854 GMT (3:54 a.m. EST) atop a Russian Soyuz rocket. The launch came 24 hours after a first attempt was delayed shortly before liftoff because of a software problem in the upper stage of the rocket.

The European Space Agency said the satellite is the first mission dedicated to studying bright nearby stars that are already known to have planets, and will focus on “planets in the super-Earth to Neptune size range.” The agency hopes that the data sent by the mission will enable the bulk density of those planets to be calculated, a first step toward understanding them better.

Its telescope will focus on bright stars to determine the size of planets as they pass in front of their host star.

Swiss astronomer and Nobel Physics Prize winner Didier Queloz, who heads the CHEOPS science team, told The Associated Press earlier this week that the mission will focus on 100 of the more than 4,000 exoplanets — ones beyond our own solar system — discovered so far, partly to determine if there’s a possibility of an Earth-like planet capable of sustaining life.

“We are one planetary system among many,” he said. “It’s all about our place in the universe and trying to understand it.”

A telescope will analyze the exoplanets’ densities and radii and determine whether they have atmospheres, Queloz said.

“We know nothing, except that they are there,” he said. Queloz added that the telescope might spend one orbit, or 100 minutes, on one exoplanet and maybe 50 orbits, or five days, on another one, depending on their sizes.

More than four hours are expected to pass between liftoff and the separation of satellites.

The rocket also carried an Earth observation satellite for the Italian Space Agency that will serve scientists and commercial and government clients, according to launch company Arianespace.

Three other satellites included one that aims to study zodiacal light and image the Milky Way, officials said.