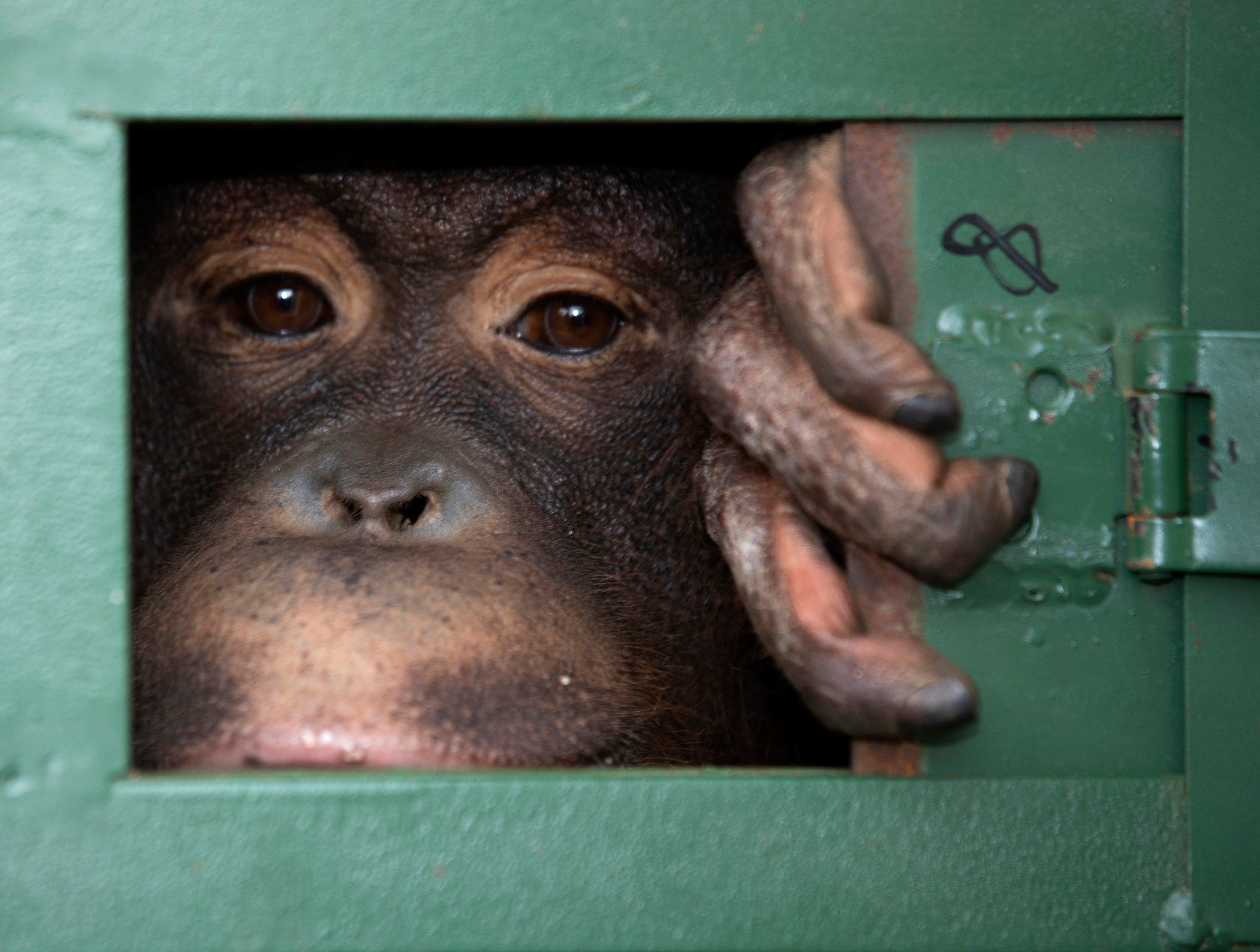 Cola, a 10-year-old female orangutan, waits in a cage to be sent back to Indonesia at a Suvarnabhumi Airport in Bangkok, Thailand, Friday, Dec. 20, 2019. Wildlife authorities in Thailand repatriated two orangutans, Cola and 7-year-old Giant, to their native habitats in Indonesia in a collaborative effort to combat the illicit wildlife trade. Cola was born in a breeding center from two smuggled orangutans that were sent back to Indonesia several years ago, according to the Department of National Park, Wildlife and Plant Conservation. (AP Photo/Sakchai Lalit)

BANGKOK — Wildlife authorities in Thailand sent two orangutans back to Indonesia on Friday as part of a collaborative effort to combat illicit wildlife trade.

Ten-year-old female Cola and 7-year-old male Giant were transported from wildlife sanctuaries in the western province of Ratchaburi to Bangkok’s Suvarnabhumi Airport, where they were put on a plane to Jakarta.

Giant was smuggled into Thailand in 2014, while Cola was born in a breeding center to two smuggled orangutans which were sent back to Indonesia several years ago, according to Thailand’s Department of National Park, Wildlife and Plant Conservation. Police found Giant when they stopped and searched a bus heading from the southern border area to Bangkok, it said.

Sixty-seven orangutans have been sent back to Indonesia in three previous batches, and more are expected to go back next year, the agency said.

The Convention on International Trade in Endangered Species — CITES — prohibits international trade in orangutans. They are found only in the forests of Sumatra and Borneo but their habitat is shrinking due to the growth of agricultural land use, making them more vulnerable to poaching. The International Union for Conservation of Nature, the global authority on the status of the natural world, lists orangutans as critically endangered.
Orangutans are often sold into the pet trade and for display in zoos and other attractions.

“The return of these orangutans will send a very strong message to the criminals responsible for the smuggling of animals across countries that both governments will act decisively,” Indonesian diplomat Dicky Komar said at the handover ceremony at the airport.

Cola will be sent to a wildlife rehabilitation center in East Kalimantan while Giant will stay in an animal nursery center in Sumatra. Giant has to spend the rest of his life in a nursery due to having had his hands amputated, making it hard for him to fend for himself. Veterinarians carried out the operation to save his life after he was bitten by some fierce monkeys. Officials say chances are good that Cola can be returned to the wild.