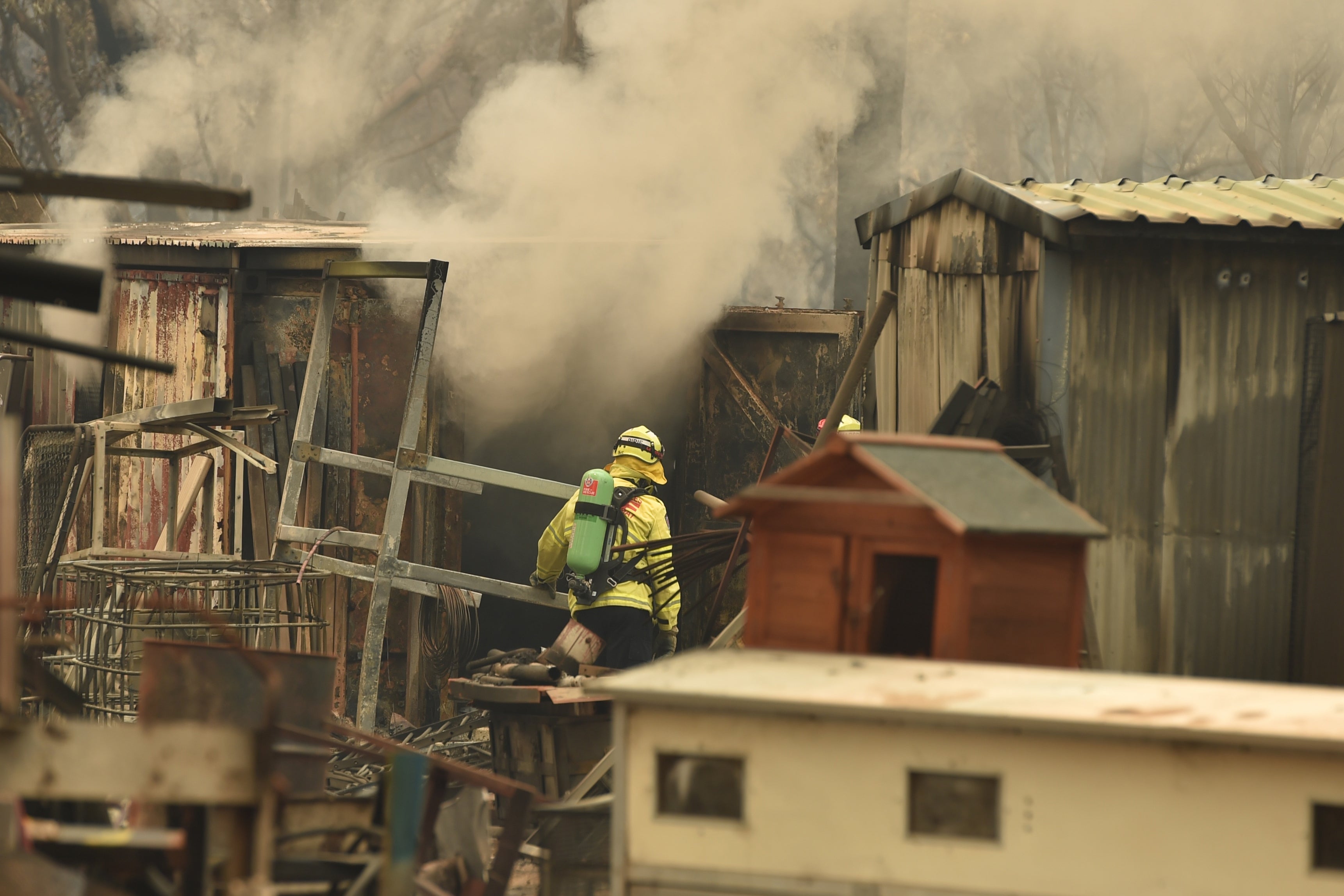 Firefighters tend to burning property caused by bushfires in Bargo, southwest of Sydney, on December 21, 2019. – Bushfires have been raging along Australia’s east coast for months, burning three million hectares (7.4 million acres) — equivalent to the size of Belgium — and razed more than 800 homes in worst-hit New South Wales alone. (Photo by PETER PARKS / AFP)

“I am not going to write off the jobs of thousands of Australians by walking away from traditional industries,” Morrison told the Seven Network, in one of several morning interviews rejecting calls for further action.

“What we won’t do is engage in reckless and job-destroying and economy-crunching targets which are being sought,” he told Channel 9, responding to calls for more climate-friendly policies.

Morrison’s media blitz came as he sought to limit the political fallout from a much-criticized Hawaiian holiday — taken as bushfires destroyed an area the size of Belgium and unleashed toxic smoke into Australia’s major cities.

Holiday plans have been hit, with national parks closing campsites and the main coastal road linking Sydney with southeastern beach towns again shuttered due to the impact of fires.

Conditions eased markedly on Monday, but authorities said in the last few days almost 200 homes have been damaged by fires in South Australia and New South Wales.

Authorities said little was left of the small town of Balmoral, southwest of Sydney, where 67-year-old artist Steve Harrison told public broadcaster ABC he had been forced to weather the fire from a make-shift kiln.

“I ran to my ute (pickup) but my garden was already on fire, the driveway was on fire, the road was on fire so I couldn’t evacuate,” he said. “The day before I had actually built myself a small kiln down the back -— a coffin-sized kiln -— just big enough for me to crawl inside.”

“I was in there for half an hour while the firestorm went over. It was huge, just glowing orange-red everywhere. Just scary. I was terrified.”

A Big Bash League cricket match in the capital Canberra was abandoned at the weekend because of toxic bushfire haze that left Australian Test bowler Peter Siddle needing treatment for smoke inhalation.

Adelaide Strikers captain Alex Carey said a doctor assessed Siddle and a couple of others. Siddle returned to Melbourne “and (is) joining the Australian squad” for a Boxing Day Test against New Zealand, Carey said.

Bushfires occur frequently in Australia, but scientists say several weather phenomena have come together to make this spring-summer bushfire season among the worst on record.

Record-low rainfall, record-high temperatures, and strong winds have made the situation more combustible, and according to scientists, are influenced by climate change.

Morrison has insisted Australia will meet its 2030 emissions targets.

“I’m going to maintain the course of responsible management, responsibly addressing the changes of climate change and responsibly ensuring that we can grow our economy in what is a very tough climate at the moment,” Morrison told the Seven Network.

However, environmental activists say those targets are not nearly enough to help the world keep global warming at safe levels.

Morrison’s government has further been criticized for seeking to achieve its 2030 targets by counting credits under a complicated global accounting method, rather than through new reductions.

“People are scared of what is going on around them. And if Mr Morrison thinks that there’s nothing to see here, it’s because he can’t see through the smoke and haze that’s been created by these bushfires,” Albanese said.