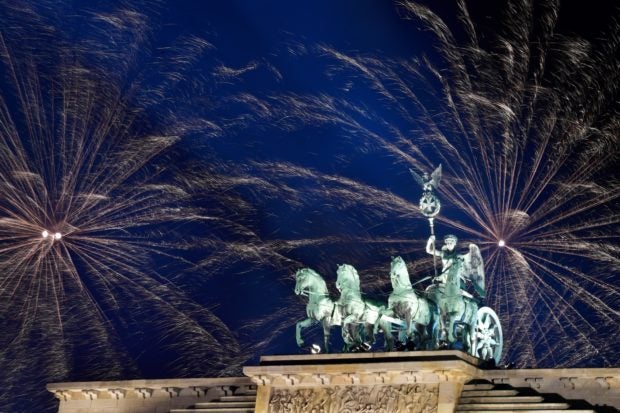 Fireworks explode behind the Brandenburg Gate in Berlin, Germany, to usher in the New Year on Jan. 1, 2019. Image: AFP/Tobias Schwartz via AFP Relaxnews

Pyrotechnic-mad Germany loves to see in the New Year with a bang but concerns about climate change have prompted several major retailers to take fireworks off the shelves this year, local media said Friday.

“The fireworks last for an hour, but we want to protect animals and have clean air 365 days a year,” said Uli Budnik, who runs several REWE supermarkets in the Dortmund area that have stopped selling fireworks.

One of the country’s main DIY chains, Hornbach, last month announced it was too late to stop this year’s order but that it would ban pyrotechnics from 2020.

Rival chain Bauhaus said it would be rethinking its fireworks offerings next year “in view of the environment”, while franchise owners of a string of Edeka supermarkets have already removed them from their stores.

Environmentalists have cheered the trend, which would have once been unthinkable in a country where revelers famously fire off huge amounts of pyrotechnics from their lawns and balconies every New Year’s Eve.

It caps a year marked by heightened climate awareness following massive “Fridays for Future” demonstrations and a summer of record-high temperatures and severe droughts.

“We hope to see a shift in society and that people buy fewer rockets and crackers this year,” Juergen Resch, head of the German environmental campaign group DUH, told DPA news agency.

Germany’s fireworks festivities release some 5,000 tons of fine particulate matter into the air on a single night — equivalent to about two months of road traffic, according to federal environment agency UBA.

Fine dust particulate matter is a major contributor to air pollution and is harmful to both human and animal health.

Many German cities have already created firework-free zones, to help the environment but also out of noise and safety concerns.

Demand for the brightly colored explosives remains high, however, and not all retailers are ready to turn their backs on fireworks revenues totaling some 130 million euros a year.

Popular discounters Aldi, Lidl and Real have said they plan to stay in the pyrotechnics business.

Fireworks sales are strictly regulated in Germany and only allowed on the final three working days of the year.

A YouGov survey of some 2,000 Germans on Friday found that 57% would support a ban on pyrotechnics for environmental and safety reasons. But 84% said they found fireworks beautiful. IB/JB

Girl, 5, who died in Albay hospital, negative for COVID-19