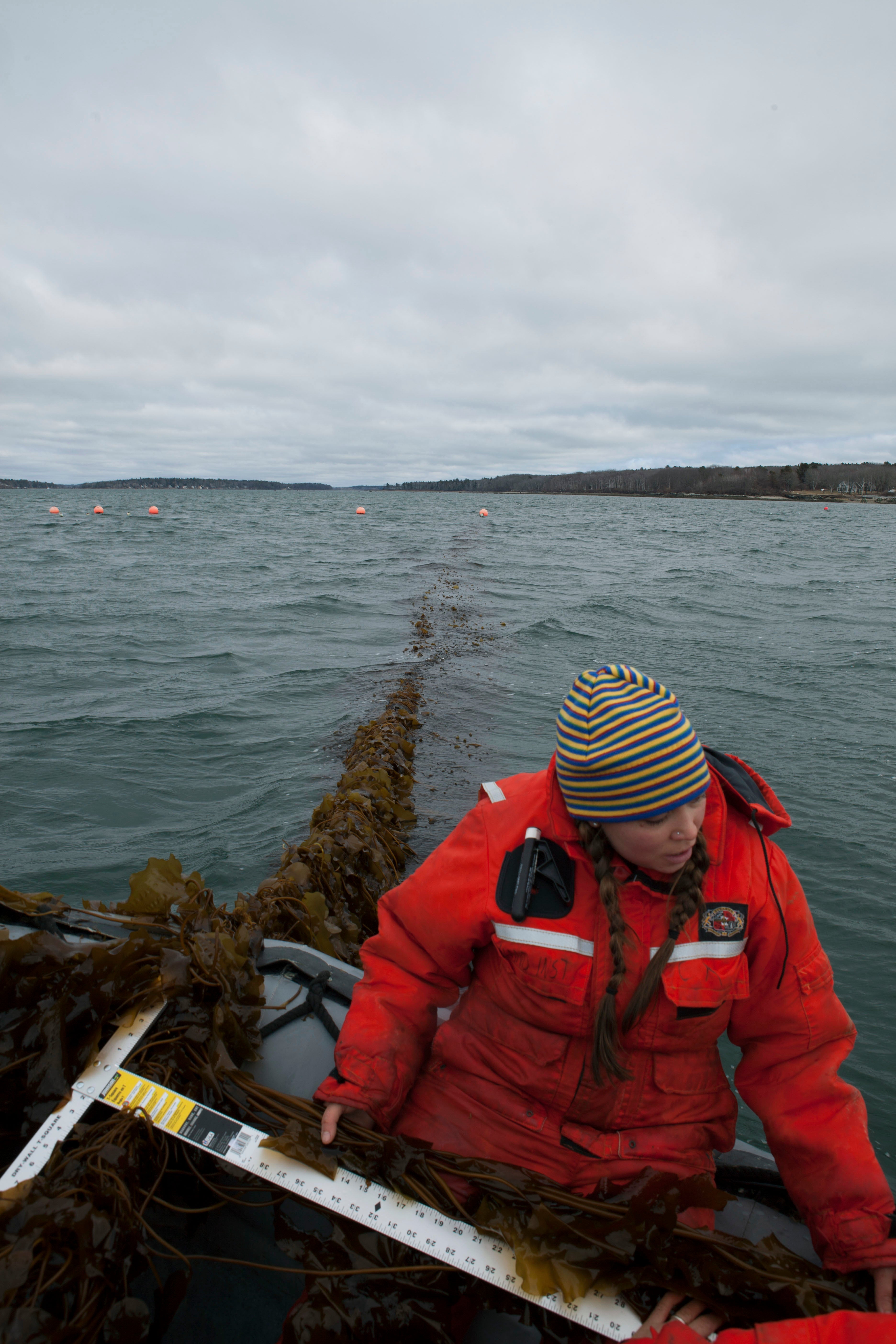 In this March 2016 photo provided by The Island Institute, Bigelow Laboratory Research Associate Brittney Honisch measures a piece of sugar kelp before harvest in Casco Bay, Maine. A group of scientists with Bigelow Laboratory for Ocean Sciences and farmers in northern New England are working on a plan to feed seaweed to cows to gauge whether it can help reduce greenhouse gas emissions that contribute to climate change. (Scott Sell/The Island Institute via AP)

FREEPORT, Maine — Coastal Maine has a lot of seaweed and a fair number of cows. A group of scientists and farmers think that pairing the two could help unlock a way to cope with a warming world.

The researchers — from a marine science lab, an agriculture center and universities in northern New England — are working on a plan to feed seaweed to cows to gauge whether that can help reduce the greenhouse gas emissions that contribute to climate change.

About a quarter of the methane in the country comes from cattle, which produce the gas when they belch or flatulate.

The concept of feeding seaweed to cows has gained traction in recent years because of some studies that have shown its potential to cut back on methane. The reduction might be because the seaweed interrupts the process of production of the gas in the animals’ guts.

One of the big questions is which kinds of seaweed offer the highest benefit to farmers looking to cut methane, and the researchers hope to find out, said Nichole Price, a senior research scientist at Bigelow Laboratory for Ocean Sciences in East Boothbay, Maine, and the project’s leader.

“What on that list has the ability to do two things — not just reduce methane emissions, but have some health benefits for the cow that have a cost savings or cost efficiency for the farmer?” Price said.

The researchers plan to conduct feeding trials with cows in Maine and New Hampshire in 2020 and 2021 to see whether seaweeds that can be used as cattle feed can cut the methane. They also intend to screen seaweeds for compounds that make them useful as cattle feed additives.

The lab work to determine whether the seaweeds succeed in reducing methane will take place at the University of Vermont.

The research team has received a $3 million grant from the Shelby Cullom Davis Charitable Fund toward the work.

Studies involving some seaweeds have yielded results in cutting methane. Researchers from the University of California, Davis, found last year that methane emissions were reduced by 24% to 58% in a dozen cows that ate one variety of the Asparagopsis genus of seaweed.

There’s no guarantee other kinds of seaweed would have the same effect, said Ermias Kebreab, a professor of animal science at UC Davis who is not involved in the New England work.

However, new kinds of seaweed feeds could still help improve cattle’s diet on farms, he said.

“I think there is indeed good potential to use seaweed as cattle feed if it can replace high protein/energy sources such as corn, alfalfa and other ingredients commonly used in the industry,” Kebreab said in an email.

One potential problem could lie in producing enough seaweed to feed to cows. But Dorn Cox, research director of Wolfe’s Neck Center for Agriculture and the Environment in Freeport, Maine, said the growth of seaweed as cattle feed could potentially benefit dairy farmers, as well as aquaculturists. Wolfe’s Neck will host some of the feeding trials.

Maine has a growing seaweed farming industry, and evidence that seaweed is good for cows’ health would aid that growth, Cox said.

“That’s why the research is so important,” Cox said. “We have to make sure it’s going to work and it’s something we can grow regeneratively as part of the Maine coastal ecosystem.”