So you want to work at Google 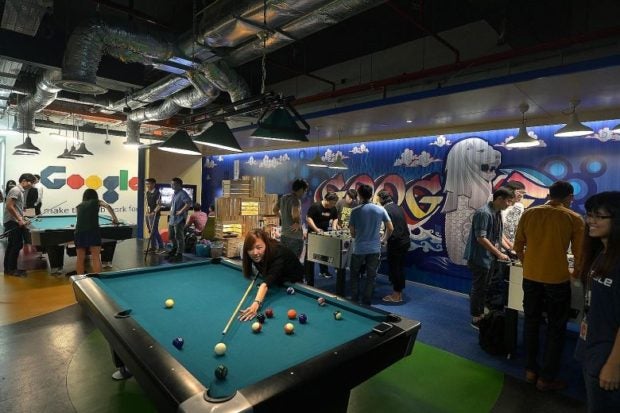 SINGAPORE — Year after year, Google has been ranked as one of the top companies to work for. This is hardly surprising, considering the high salaries and perks such as stock options, massage rooms, nap pods, laundry services and hairdressers, and mechanics for your car on site.

The tech giant receives more than a million job applications a year. In the end, only a few thousand make the cut.

So what does it take to become a “Googler”, as Google employees are called?

What if you are able to answer one of the brain teasers that Google is famous for? Teasers like “How many aeroplanes are in the sky right now?” and “How many ping pong balls would fit inside a 747?”

Ms Kyle Ewing, director of talent and outreach programmes in Google’s People Operations Department, says the company has moved away from that, adding: “There is actually no correlation to the hiring outcome.”

She notes that Google has used data analytics for years to figure out how to hire people with the right fit. “There are many aspects of the process which over time have evolved… We are constantly re-evaluating and testing and reiterating our process.”

So does having a degree from a top university count? She states quite plainly that there is no correlation between Google’s good hires and the universities that they come from or their grade point averages.

“Google now hires from a wide range of universities,” she says, including many employees without degrees.

She notes that Google has also been hiring more people from under-represented groups.

Women tech hires worldwide last year, for example, increased to 25.7 per cent, representing continued growth in hiring since 2015 when it was 22.1 per cent.

Non-tech women hires in the US increased to 51.6 per cent last year, a 6.4 percentage point increase from the previous year.

She stressed that studies have shown that companies build better products by having teams that come from different backgrounds with different perspectives.

A We really look to assess someone’s ability to do the job that we are hiring them for.

We look at general cognitive ability – this is your ability to solve problems. By that, we don’t mean your ability to answer those brain teasers, like how many ping pong balls can fit in a 747 or how many planes are in the air at any one time. But we want to understand: How do you tackle problems? What kinds of questions are you asking to get to the root of a problem? That’s really key to problem-solving.

Google is more interested in your ability to learn and the ability to process on the fly, and pull together disparate bits of information.

Q What about work related ability – whether someone is able to do the job you are hiring for?

A Yes, work-related knowledge is a given. We do look at your qualifications – if you have one related to the job we are hiring for. But more importantly, I want to know how you will apply those skills you have picked up from your course. Let’s take someone with a computer science degree – a lot of folks understand the theory behind it. But what we are interested in is if you can apply the computer science skills to solving a problem.

Q Google stresses the importance of leadership. How can an applicant demonstrate that?

A This doesn’t mean you need to have managed a team. What we are looking for is, do you have emergent leadership?

Google has quite a flat structure… we need people to have initiative to voice their ideas and see how they can be implemented.

It’s a natural desire to want to make a difference and to be able to inspire other folks to come along with you. It’s innate leadership versus leadership that is granted because this is your position.

Q What about “Googleyness” that everyone refers to?

A I know there’s a lot of confusion about that, but it is really about – are you intellectually curious? Can you thrive amid ambiguity? Do you have a real desire to make an impact? Do you work well in a team?

Over the years, we have found that these are the qualities that make someone most successful at Google. Thriving in ambiguity and being intellectually curious are two that really stand out.

Q How do you assess for these attributes and qualities, including “Googleyness”?

A There’s no pen-and-paper test for this. Basically, you give them scenario questions, behavioural questions. For example, we may ask applicants to tell us about a difficult time in their life, what they learnt from it and how did they overcome it? Or about a time they took a risk and failed.

This structured interview approach has been very successful, helping us identify folks who can succeed here at Google.

Q Who asks these questions and evaluates the answers?

A Google uses hiring panels, including many of its employees, to interview applicants.

We used to conduct many interviews before deciding on a person, but over the years through analytics, the company has determined that after four interviews, they do not achieve a much greater degree of confidence about whether the interviewee is a good fit for a position.

As a result, we have capped the number of interviews that we put a candidate through.

Q What about internships? Can that lead to a job at Google?

A Google is known for having one of the most coveted internship programmes worldwide. We received more than 100,000 applications this year.

And if you are selected, it’s real work. No fetching coffee or making copies. Interns get actual work with real deadlines and expectations.

They are encouraged to speak up in meetings, defend their work, and become a vital part of a team. They are expected to contribute and make an impact.

They are not guaranteed jobs, but they do have a good shot at getting full-time positions at the company.

We look at our intern programme as the best source of full-time talent. It is our hope that every intern who performs well will be able to find a full-time opportunity at Google.

Intern conversions (hiring an intern as a full-time employee) happen at a far greater rate than the hiring rate for the average applicant.

Ms Kyle Ewing leads the talent and outreach programs team at Google, which exists to invest in the next generation of Googlers across campuses, industry, and research audiences.

Her team is based out of more than 30 offices globally and is responsible for all of Google’s entry-level hiring, internship, apprenticeship, and residency programs.

It focuses on connecting with, growing, and hiring people who have been historically under-represented in the tech industry.

Ms Ewing studied German and accounting at the University of California, Los Angeles. She started her career in public accounting before taking on a 12-month role as a contractor at Google in 2006.