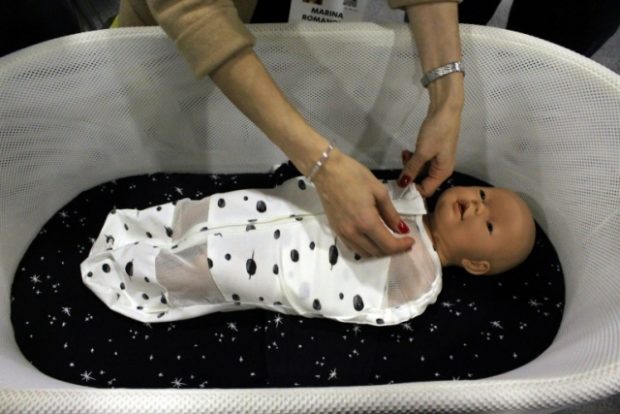 A Snoo robotic crib on display at the Consumer Electronics Show in Las Vegas. Image: AFP/Glenn Chapman via AFP Relaxnews

A robotic crib with a mission of preventing sudden infant death syndrome made its appearance this week at the Consumer Electronics Show (CES), part of a growing “baby tech” exhibit.

Snoo cribs, made by the California startup Happiest Baby in collaboration with industrial designer Yves Behar, use built-in microphones to “hear” babies’ cries and then soothe them with rocking.

Snoo’s parent has partnered with more than 50 companies including Snap, Hulu and Under Armour to provide the high-tech crib to workers on parental leave, said Marina Romanova of Happiest Baby while demonstrating it on the show floor using a doll.

“It promotes productivity and loyalty,” she added.

The louder a baby cries, the more vigorously the rocking, within limits, a demonstration showed.

If the strongest rocking setting does not quiet a baby, the Snoo stops and sends a parent a smartphone message to check on the child.

Speakers built into the sides generate white noise, the volume of which rises along with the intensity of baby crying.

A mobile application synched to Snoo also provides parents a report on how many times a baby woke during the night.

Snoo is already being used in an array of hospitals to help care for newborns suffering from drug withdrawal or other medical challenges, according to Romanova. RGA

Mother who threw her newborn baby at crib jailed