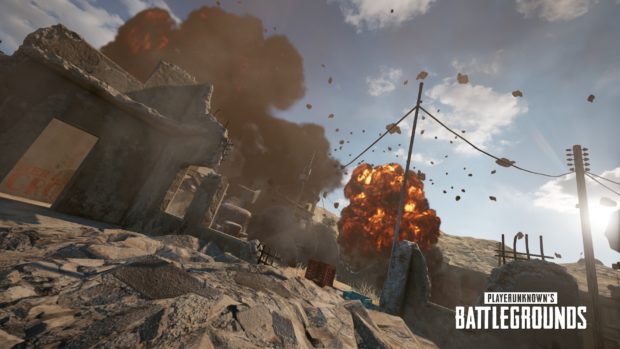 “PUBG” map “Karakin” features buildings that can be blown up by players or the game itself. Image: courtesy of PUBG Corporation via AFP Relaxnews

Season 6 of “PlayerUnknown’s Battlegrounds” (PUBG) debuts its smallest map to date: the 2-by-2-kilometer “Karakin” map features destructible walls and floors, and a Black Zone that levels entire towns and compounds.

Set on a fictional North African island, the latest map for computer and console game “PUBG” brings not just a new environment but also a spread of new gameplay experiences as player counts are capped at 64 instead of 100.

Now available on the game’s Public Test Server for PC, PlayStation and Xbox players, Karakin’s buildings can be partially demolished or completely flattened by the use of player-deployed Sticky Bombs in the first case, or a game-controlled Black Zone in the second instance.

The Black Zone feature gives players a short amount of time to evacuate a specific, randomly chosen area before delivering a variable amount of damage to everything within its limits.

As a result, buildings typically used for shelter and tactical advantage change shape over the course of a match, with a Black Zone impact potentially razing them completely.

Players also have some input into how buildings, sightlines, and routes evolve as matches progress.

A new piece of equipment, the Sticky Bomb, can be used to blow out Breach Points found on specific walls, floors and ceilings across Karakin.

While Stickies can also open up secret areas, other walls allow for bullet penetration, allowing players to get the jump on each other, whether through armed assault or via a sneaky glimpse of enemy positioning.

Together, the Black Zone, Sticky Bombs, and Breach Points introduce the sort of live changes reminiscent of the “Battlefield” franchise and its hallmark destructible environments.

Away from the excitement of Karakin, player-controlled airborne transport is being added to original map Erangel and second environment Miramar.

Motor Gliders contain space for a pilot and a gunner but raining fire from the skies isn’t completely straightforward: as well as staying on top of flight dynamics, players have to fuel up before taking off, balance engine speed with gas consumption, and watch their altitude lest the engine loses power.

Meanwhile, snow map Vikendi is being taken out of public rotation to make space for Karakin.

It’ll still be available for custom matches, but the PUBG team is using the opportunity to revamp several aspects of the December 2018 environment. IB/NVG