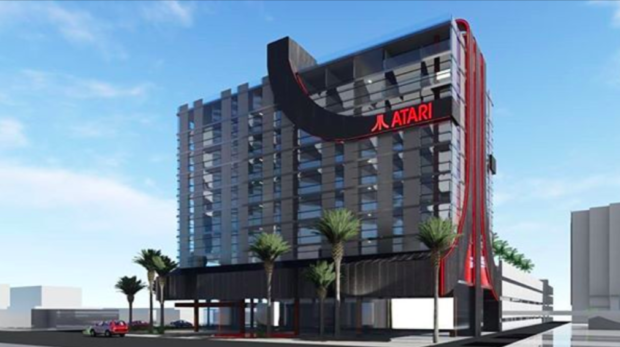 A preview of the exterior of an Atari-branded hotel. Image: Instagram/@atari

Atari is building eight video game-themed hotels in the United States that will include spaces such as esport studios. The company is well-known for its popular video games such as “Pong”, “Asteroids” and “Missile Command”.

Atari partnered with GSD Group and True North Studio for their latest venture, as seen in a statement on their website yesterday, Jan. 27.

The hotels will be combining the “iconic brand with a one-of-a-kind video game-themed destination.” They will also include immersive gaming experiences for guests by offering the latest in virtual and augmented reality. Meanwhile, select establishments are also going to feature studios that can cater to esport events.

The gaming company gave its fans a preview of the future hotels’ exterior by uploading a photo on Instagram yesterday. The buildings will feature the brand’s color scheme of red and black. The hotels’ sides will feature Atari’s three-line logo while the front will display the company name.

Your next vacation destination. So much more than just a place to lay your head 🌴 Coming to Phoenix, Las Vegas, Denver, Chicago, Austin, Seattle, San Francisco, and San Jose. #atarihotels

GSD Group and producer Napolean Smith III, who worked on the “Teenage Mutant Ninja Turtles” reboot in 2014, will be helming the development and design of the hotels. JB

WATCH: Hotel worker stands up to woman’s racist remark, denies her a room