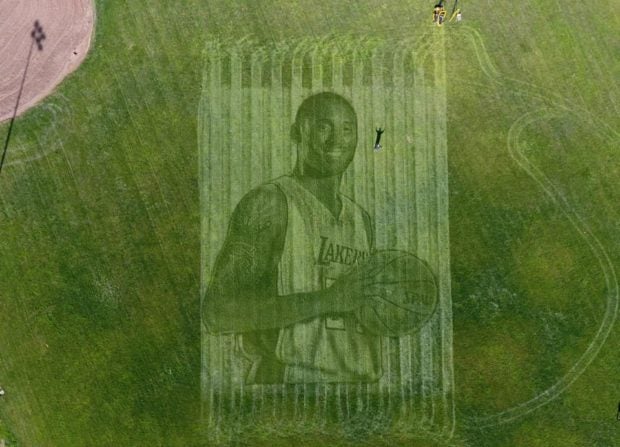 As tributes to the late NBA legend Kobe Bryant continue to spread online, one couple in California, USA, chose to honor him with a giant grass mural. The athlete died in a helicopter crash in Calabasas on Jan. 26.

Pete Davis and Kelli Pearson, who are fans of Bryant, made the memorial in a field in Pleasanton last Wednesday, Jan. 29, as per the Los Angeles Times on Jan. 31.

Prior to creating the mural, Pearson first stitched together the image they would use from four different photos of Bryant.

Pearson then created an image of the athlete subtly smiling with a basketball between his hands, while wearing his Los Angeles Lakers jersey. The final photo was then translated onto the field by the machine, creating a 115-foot-tall and 92-foot-wide grass mural.

The tribute was made using a lawn mower-like machine from their company, New Ground Technology, called the TurfPrinter. As per report, the invention uses streams of air to bend grass to create dark and light contrasts.

The couple uploaded a video of the memorial and the process of it being created on YouTube on Jan. 30. Using their technology, the mural took one hour to make.

“The machine uses, in a layman’s sense, GPS—telling the machine exactly where it’s at so it knows where to print,” Davis was quoted as saying.

As the caretaker of the machine, he said that “[it was his] responsibility” to create the mural.

The mural is no longer present on the field after being wiped away by the park’s routine maintenance, as per report. However, it was widely recognized by the basketball star’s fans before it disappeared.

“There are people reaching out from all over the world to us… thanking us for doing such an amazing tribute,” Pearson said. “That’s overwhelming. I can’t ever explain how that makes me feel.”  Ryan Arcadio /ra