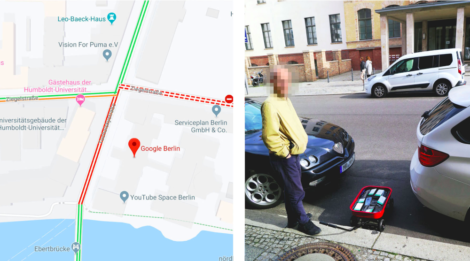 An artist in Germany put to the test how Google Maps affects its users’ way of life by creating virtual traffic jams through 99 smartphones in a cart.

Simon Weckert, a Berlin-based artist, wanted to highlight how the activity in the virtual app affects the physical world. His performance and installation art entitled “Google Maps Hacks” has the capacity to direct cars on to another route by starting fake traffic jams on the app, as seen on his YouTube video last Saturday, Feb. 1.

“Through this activity, it is possible to turn a green street red which has an impact in the physical world by navigating cars on another route to avoid being stuck in traffic,” he said.

Weckert explained that the advent of interactive maps has changed how people went through their daily activities, according to his website.

“Google’s map service has fundamentally changed our understanding of what a map is, how we interact with maps, their technological limitations, and how they look aesthetically,” he stated.

The digital map service and the apps dependent on it creates “new forms of digital capitalism and commodification,” the artist said. The virtual map service has made changes to real cities.

Weckert cited how apps such as Airbnb affect a city’s housing market and mobility culture. Aside from that, dating apps and food delivery apps such as Tinder and Foodora, respectively, are also dependent on the map.

He added, “Without these maps, car sharing systems, new taxi apps, bike rental systems and online transport agency services such as [Uber] would be unthinkable.”

With these in mind, Weckert posed the question: “[W]hat is the relationship between the art of enabling and techniques of supervision, control and regulation in Google’s maps?”

He also wondered if these maps determine and control people’s behavior and opinions and if the maps exercise power and control of knowledge, as per his website.

Weckert said as an artist his focus is in the digital world. His artist profile states that through his artworks, he seeks to assess the value of technology from the future generation’s perspective.

The artist also “wants to raise awareness of the privileged state in which people live within Western civilization and remind them of the obligations attached to this privilege.” NVG